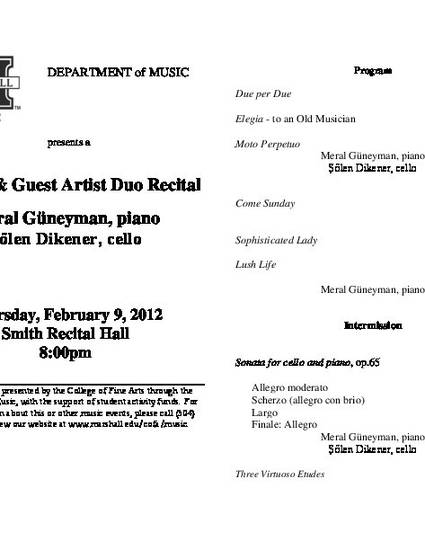 Pianist Meral Güneyman made her orchestral debut in the United States under the baton of Michael Tilson Thomas as first prize winner of the Buffalo Philharmonic Orchestra’s Young Artist’s Competition. She was promptly reengaged by Tilson Thomas to play the Schumann Concerto with the Pittsburgh symphony. Her Carnegie Hall debut was as winner of the East & West Artists’ Competition. After winning the prestigious William Kapell International Competition at the University of Maryland she performed with Leon Fleischer and the Baltimore Symphony. Her accolades further include winner of the Juilliard School’s Chopin Concerto Competition and Naumburg Competition finalist, which, once again, brought her to Carnegie Hall. Meral is a Turkish born American citizen and holds the title of “State Artist” representing the Ministry of Culture of the Turkish republic, worldwide. Her appearances have taken her to the Cervantes and Monterrey Festivals in Mexico; the International Istanbul Festival, The American Music Festival at the National Gallery in Washington; to Frederick Chopin Festival; the Presidential Symphony in Turkey; The Sarajevo Philharmonic; the Ljubliana Festival in Slovenia; and to Germany, Canada, France, Austria, Serbia, Croatia, Bosnia, Belgium, Italy, England and Japan as well as major cities in the U.S. In her role as academic and pedagogue she has appeared and concertized ar Harvard University, M.I.T., Purchase and Georgetown Universities, NYS, the Bosphorus University in Istanbul (Turkey) and other institutions. She is a two time winner of the Laura Conover Pedagogy Award.

Meral has worked to raise money for many charity organizations, among them: Save the children Fund, the Muscular Dystrophy Association, UNA-NY, UNA-USA, Help educate at Risk Orphans campaign, combating HIV/AIDS pandemics and Americans for Cures as well as her most passionate and current cause, stem cell research.

Note
DUE TO LICENSING RESTRICTIONS CD IS AVAILABLE FOR ROOM USE ONLY.
Library of Congress Authorities