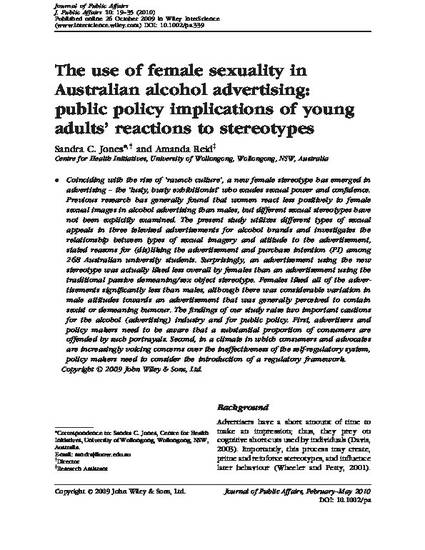 Jones, S.C. & Reid, A. (2010). The use of female sexuality in Australian alcohol advertising: public policy implications of young adults' reactions to stereotypes. Journal of Public Affairs, 10 (1-2), 19-35.

Abstract
Coinciding with the rise of raunch culture, a new female stereotype has emerged in advertising - the lusty, busty exhibitionist who exudes sexual power and confidence. Previous research has generally found that women react less positively to female sexual images in alcohol advertising than males, but different sexual stereotypes have not been explicitly examined. The present study utilizes different types of sexual appeals in three televised advertisements for alcohol brands and investigates the relationship between types of sexual imagery and attitude to the advertisement, stated reasons for (dis)liking the advertisement and purchase intention (PI) among 268 Australian university students. Surprisingly, an advertisement using the new stereotype was actually liked less overall by females than an advertisement using the traditional passive demeaning/sex object stereotype. Females liked all of the advertisements significantly less than males, although there was considerable variation in male attitudes towards an advertisement that was generally perceived to contain sexist or demeaning humour. The findings of our study raise two important cautions for the alcohol (advertising) industry and for public policy. First, advertisers and policy makers need to be aware that a substantial proportion of consumers are offended by such portrayals. Second, in a climate in which consumers and advocates are increasingly voicing concerns over the ineffectiveness of the self-regulatory system, policy makers need to consider the introduction of a regulatory framework.
Disciplines
Citation Information
Sandra C. Jones and Amanda Reid. "The use of female sexuality in Australian alcohol advertising: public policy implications of young adults' reactions to stereotypes" (2010) p. 19 - 35
Available at: http://works.bepress.com/sjones/19/