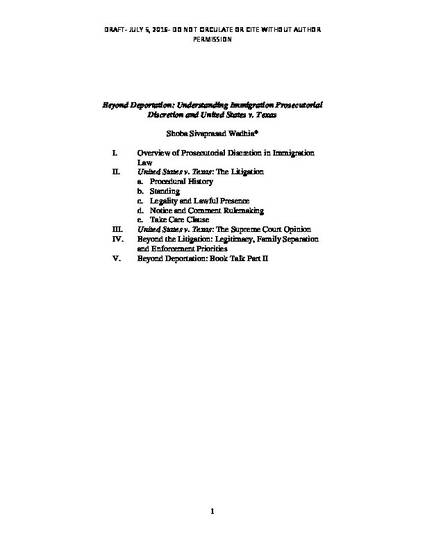 In this article, I place the Supreme Court case of United States v. Texas into a broader context by describing the history and legal authority for prosecutorial discretion in immigration law and highlighting the contents and recommendations in my book, Beyond Deportation: The Role of Prosecutorial Discretion in Immigration Cases. Part I of this article offers a primer on the role of prosecutorial discretion in immigration law and also describes two related programs announced by President Obama on November 20, 2014 and the subject of litigation for nearly two years as of this writing. Part II provides a history and analysis of United States v. Texas, a lawsuit originally brought by the state of Texas and twenty-five other states and decided on June 23, 2016. This section offers highlights from the oral arguments held at the U.S. Supreme Court and my position on the winning arguments. Part III raises normative questions about the implementation, legitimacy, and continued enforcement of immigration law against “priorities” identified by the government. Part IV discusses my book Beyond Deportation, which includes a history about discretion, my efforts to obtain data about the individuals who receive discretion and recommendations moving forward.