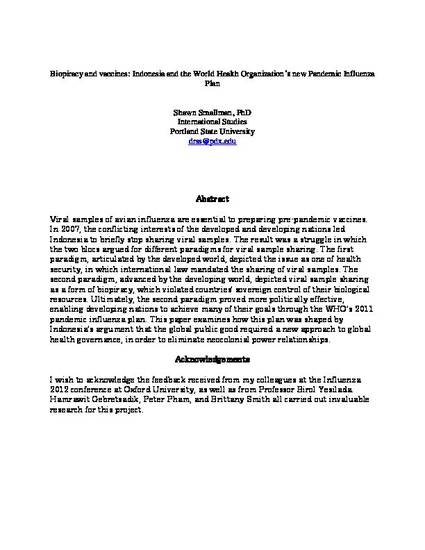 Viral samples of avian influenza are essential to preparing pre-pandemic vaccines. In 2007, the conflicting interests of the developed and developing nations led Indonesia to briefly stop sharing viral samples. The result was a struggle in which the two blocs argued for different paradigms for viral sample sharing. The first paradigm, articulated by the developed world, depicted the issue as one of health security, in which international law mandated the sharing of viral samples. The second paradigm, advanced by the developing world, depicted viral sample sharing as a form of biopiracy, which violated countries' sovereign control of their biological resources. Ultimately, the second paradigm proved more politically effective, enabling developing nations to achieve many of their goals through the WHO's 2011 pandemic influenza plan. This paper examines how this plan was shaped by Indonesia's argument that the global public good required a new approach to global health governance, in order to eliminate neocolonial power relationships.

This is the publisher's final PDF. Reproduced with permission