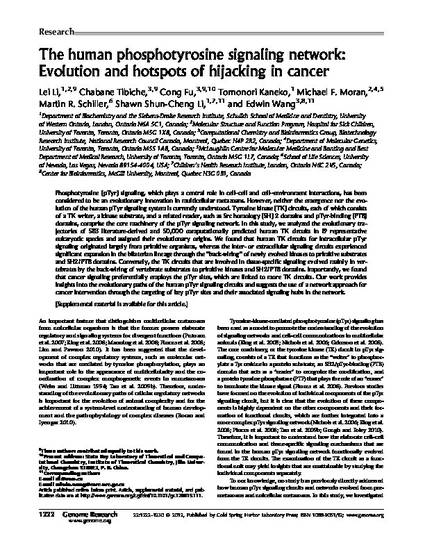 Phosphotyrosine (pTyr) signaling, which plays a central role in cell-cell and cell-environment interactions, has been considered to be an evolutionary innovation in multicellular metazoans. However, neither the emergence nor the evolution of the human pTyr signaling system is currently understood. Tyrosine kinase (TK) circuits, each of which consists of a TK writer, a kinase substrate, and a related reader, such as Src homology (SH) 2 domains and pTyr-binding (PTB) domains, comprise the core machinery of the pTyr signaling network. In this study, we analyzed the evolutionary trajectories of 583 literature-derived and 50,000 computationally predicted human TK circuits in 19 representative eukaryotic species and assigned their evolutionary origins. We found that human TK circuits for intracellular pTyr signaling originated largely from primitive organisms, whereas the inter- or extracellular signaling circuits experienced significant expansion in the bilaterian lineage through the "back-wiring" of newly evolved kinases to primitive substrates and SH2/PTB domains. Conversely, the TK circuits that are involved in tissue-specific signaling evolved mainly in vertebrates by the back-wiring of vertebrate substrates to primitive kinases and SH2/PTB domains. Importantly, we found that cancer signaling preferentially employs the pTyr sites, which are linked to more TK circuits. Our work provides insights into the evolutionary paths of the human pTyr signaling circuits and suggests the use of a network approach for cancer intervention through the targeting of key pTyr sites and their associated signaling hubs in the network.