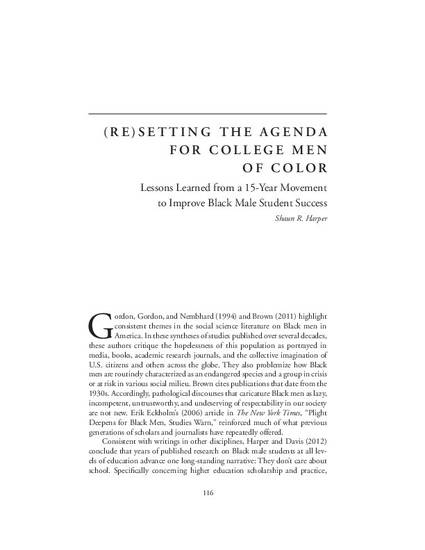 Between 1997 and 2012, much was done on college campuses and elsewhere to improve Black male student achievement. Notwithstanding, their enrollments, academic performance, and rates of baccalaureate degree attainment remain just as troublesome now as they were 15 years ago. But why? And what can be learned as various stakeholders introduce future initiatives in response to issues affecting Black undergraduate men, as well as Asian American/Pacific Islander (AAPI), Latino, and Native American male collegians? In this chapter, I chronicle the 15-year emphasis on Black male students in U.S. higher education. I first catalogue a range of efforts enacted between 1997 and 2012, and then explore why Black male student enrollments, engagement, and degree attainment rates remained relatively unchanged. My hope is that the shortcomings and shortsightedness of these efforts will be instructive for educators and administrators who attempt to improve outcomes and development among college men of color. Noteworthy is that Latino, AAPI, and Native American undergraduate men, combined, have received less attention than have Black male collegians over the past decade and a half. Hence, this chapter is based on a movement intended to improve Black male student success, but concludes with recommendations for future efforts aimed at all four groups, individually and collectively.