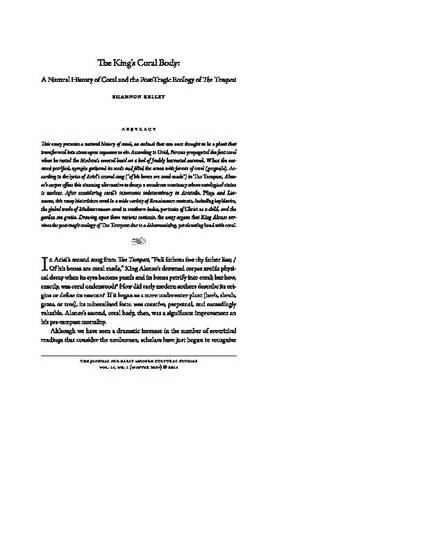 This essay presents a natural history of coral, an animal that was once thought to be a plant that transformed into stone upon exposure to air. According to Ovid, Perseus propagated the first coral when he rested the Medusa's severed head on a bed of freshly harvested seaweed. When the seaweed petrified, nymphs gathered its seeds and filled the ocean with forests of coral (gorgonia). According to the lyrics of Ariel's second song ("of his bones are coral made") in The Tempest, Alonso's corpse offers this stunning alternative to decay: a wondrous constancy whose ontological status is unclear. After considering coral's taxonomic indeterminacy in Aristotle, Pliny, and Linnaeus, this essay historicizes coral in a wide variety of Renaissance contexts, including lapidaries, the global trade of Mediterranean coral to southern India, portraits of Christ as a child, and the garden sea grotto. Drawing upon these various contexts, the essay argues that King Alonso survives the post-tragic ecology of The Tempest due to a dehumanizing, yet elevating bond with coral.

All rights reserved. Archived here with a 12 month embargo at the request of the copyright holder.