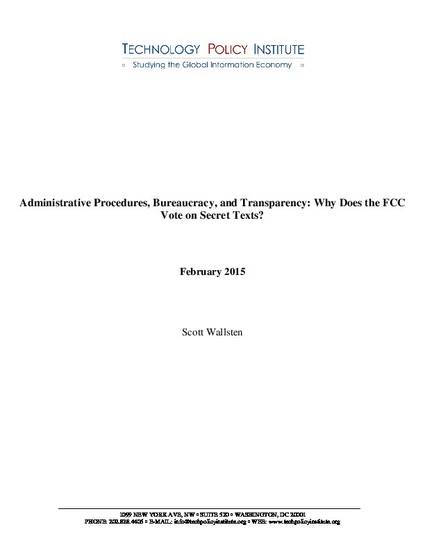 The U.S. Federal Communications Commission (FCC) does not reveal the text of regulations on which it votes. Instead, after the vote the Commission grants the relevant bureau “editorial privileges” to continue drafting the order. It then releases the final version days, weeks, or even months after the vote. As a result, it is not possible to know if everything in the final rule was actually subject to a vote. In particular, it raises the question of whether the delay between vote and publication is truly for “editorial” changes or if more substantive changes occur after the vote.

In this paper, I assemble a dataset of every vote back to the Commission’s origin in 1934 to examine when this practice began, as well as a more detailed dataset of every vote from 1994 – 2013 to explore this question. I use a two-stage model to explore the relationship between aspects of the rule, the vote, and the delay between vote and publication. I find, first, that the FCC has not always delayed publication after the vote: until the early 1970s orders were almost always made public immediately following the vote. Second, the more controversial an order, as measured by the ex partes filed, the fewer commissioners vote in favor. The length of the order, as measured by the number of paragraphs, is not correlated with the length of the delay, suggesting that it is not simple copy editing that is responsible for the delay between vote and publication.