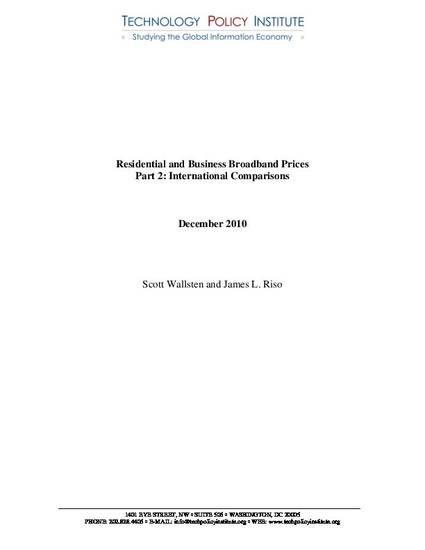 For this project, we assemble a new dataset consisting of more than 25,000 residential and business broadband plans from all OECD countries from 2007–2009. We explore three issues: the relationship between plan components—such as metering—and consumer prices, price changes over time, and how broadband prices vary across countries.

This paper, part 2 of the project, studies prices and price changes over time in the United States and other OECD countries. We find that residential prices in the U.S. remained fairly stable overall in this time period for both standalone and triple play (voice, video, and data) plans, though prices for some speed tiers increased while others decreased. Business broadband prices in the U.S., however, appear to have decreased by 15-25 percent over the three years, with faster speeds showing bigger price decreases. Prices for standalone broadband plans in the U.S. are approximately in the middle of the range of prices across OECD countries. Prices for triple play plans in the U.S. are among the highest in the OECD. And while residential prices have on the whole remained constant in the U.S. they have been declining in most other countries.