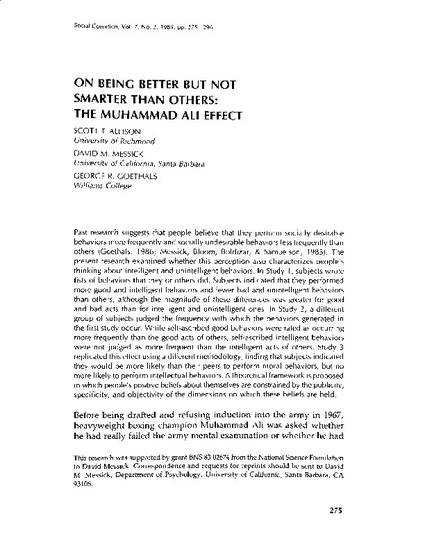 Article
On Being Better but not Smarter than Others: The Muhammad Ali Effect
Social Cognition
Download Find in your library
DOI
10.1521/soco.1989.7.3.275
Abstract

Past research suggests that people believe that they perform socially desirable behaviors more frequently and socially undesirable behaviors less frequently than others (Goethals, 1986; Messick, Bloom, Boldizar, & Samuelson, 1985). The present research examined whether this perception also characterizes people's thinking about intelligent and unintelligent behaviors. In Study 1, subjects wrote lists of behaviors that they or others did. Subjects indicated that they performed more good and intelligent behaviors and fewer bad and unintelligent behaviors than others, although the magnitude of these differences was greater for good and bad acts than for intelligent and unintelligent ones. In Study 2, a different group of subjects judged the frequency with which the behaviors generated in the first study occur. While self-ascribed good behaviors were related as occurring more frequently than the good acts of others, self-ascribed intelligent behaviors were not judged as more frequent than the intelligent acts of others. Study 3 replicated this effect using a different methodology, finding that subjects indicated they would be more likely than their peers to perform moral behaviors, but no more likely to perform intellectual behaviors. A theoretical framework is proposed in which people's positive beliefs about themselves are constrained by the publicity, specificity, and objectivity of the dimensions on which these beliefs are held.

Please note that downloads of the article are for private/personal use only.

Please note that downloads of the article are for private/personal use only.