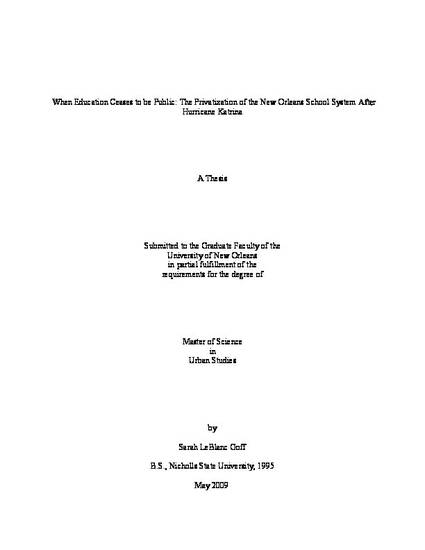 This study examines the privatization movement in the post-Katrina New Orleans education system. Less than a month after Katrina, a well-financed charter school movement was moving swiftly through the ravaged city. Nationally, a network of right-wing think tanks and school choice advocates descended on New Orleans shortly after the storm. Locally, state legislators and local leaders pushed from the inside for reform in the way of charter schools. Aided by a state takeover of schools and federal and corporate financing, the "great experiment" had begun. This study strives to cut through the façade of the charter school movement, and to investigate and explain the real motivations of the expected outcomes of the privatizers. Finally, the current injustices caused by the experiment being conducted in New Orleans are reviewed as an extension of the historical racial inequities of the school system.

Rights
The University of New Orleans and its agents retain the non-exclusive license to archive and make accessible this dissertation or thesis in whole or in part in all forms of media, now or hereafter known. The author retains all other ownership rights to the copyright of the thesis or dissertation.
Citation Information
Sarah LeBlanc Goff. "When Education Ceases to be Public: The Privatization of the New Orleans School System After Hurricane Katrina" (2009)
Available at: http://works.bepress.com/sarah_goff/31/