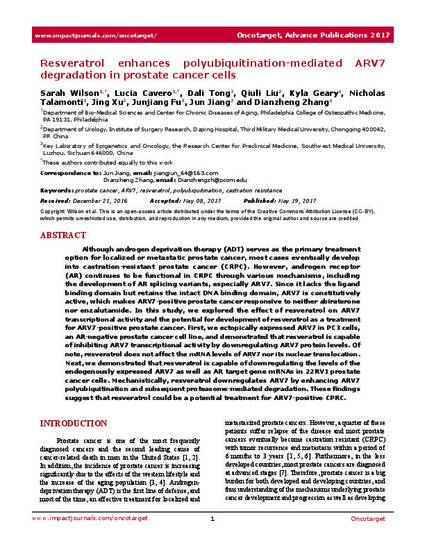 Although androgen deprivation therapy (ADT) serves as the primary treatment option for localized or metastatic prostate cancer, most cases eventually develop into castration-resistant prostate cancer (CRPC). However, androgen receptor (AR) continues to be functional in CRPC through various mechanisms, including the development of AR splicing variants, especially ARV7. Since it lacks the ligand binding domain but retains the intact DNA binding domain, ARV7 is constitutively active, which makes ARV7-positive prostate cancer responsive to neither abiraterone nor enzalutamide. In this study, we explored the effect of resveratrol on ARV7 transcriptional activity and the potential for development of resveratrol as a treatment for ARV7-positive prostate cancer. First, we ectopically expressed ARV7 in PC3 cells, an AR-negative prostate cancer cell line, and demonstrated that resveratrol is capable of inhibiting ARV7 transcriptional activity by downregulating ARV7 protein levels. Of note, resveratrol does not affect the mRNA levels of ARV7 nor its nuclear translocation. Next, we demonstrated that resveratrol is capable of downregulating the levels of the endogenously expressed ARV7 as well as AR target gene mRNAs in 22RV1 prostate cancer cells. Mechanistically, resveratrol downregulates ARV7 by enhancing ARV7 polyubiquitination and subsequent proteasome-mediated degradation. These findings suggest that resveratrol could be a potential treatment for ARV7-positive CPRC.

This article was published in Oncotarget.