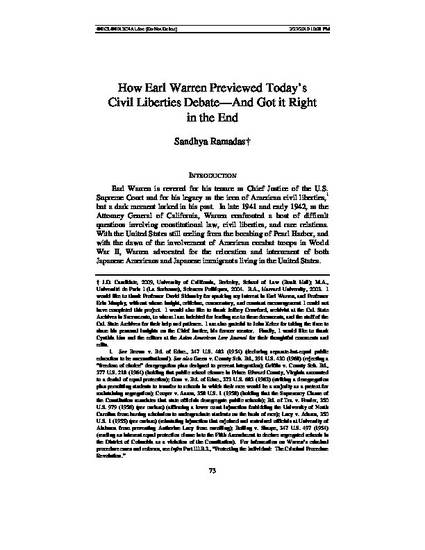 Earl Warren is revered for his tenure as Chief Justice of the U.S. Supreme Court and for his legacy as the icon of American civil liberties, but a dark moment lurked in his past. In late 1941 and early 1942, as the Attorney General of California, Warren confronted a host of difficult questions involving constitutional law, civil liberties, and race relations. With the United States still reeling from the bombing of Pearl Harbor, and with the dawn of the involvement of American combat troops in World War II, Warren advocated for the relocation and internment of both Japanese Americans and Japanese immigrants living in the United States.

How did this heralded champion of individual freedom once decide to subordinate civil liberties to security? Two documents released in 2006 by the California State Archives, which houses Warren's California papers, shed light on his decision-making process. The first is a speech Warren delivered in June of 1942 to the Stanford Law Society entitled “Martial Rule in a Time of War.” The second is a set of 138 letters sent from February 17 to 24, 1942 by California law enforcement in response to Warren's request for suggested solutions to the “alien problem” in California. These documents have never before been the subject of scholarly publication.

This Article is an attempt to focus on Warren's decision-making process concerning Internment in light of these newly released documents. It is also an attempt to analyze the lifetime transformation of Warren's attitude surrounding civil rights and the protection of individual liberties, as well as document Warren's progression from Internment advocate to civil rights proponent. Given the documented current of racism that underlay the Internment decision, many scholars have argued that Warren's changed attitude towards civil rights was influenced by his changed views of race over his lifetime.

But another factor that arguably influenced Warren's transformation, and one that has been less explored by scholars, was his changing view of the law's role and function in our society. This Article argues that Warren began his legal career with a vision of the law as predominantly a means of securing state stability; by the end, he viewed state power as the ultimate threat and the law as the predominant mean of safeguarding citizens against it. This Article does not attempt to remove Warren's decision to advocate for Internment from its racial context, nor does it attempt to minimize that context. Rather, it attempts, with the information contained in these two newly released documents, to analyze Warren's support for Internment in the context of his views on the role of the law, and to trace the evolution of Warren's concept of the role of the law throughout his lifetime.

This Article begins with a discussion of the historical context surrounding the decision to intern Japanese Americans and Japanese immigrants, including Warren's role in Internment. Next, the Article examines Warren's decision-making process, exploring his speeches, articles, Congressional testimony, and the letters Warren solicited and received from California's local law enforcement. The article then discusses Warren's career following his time as Attorney General of California, from Governor of California to Chief Justice, including Warren's final reflections on his decision to intern the Japanese and his changing concept of the role and function of the law from depriver to protector of civil liberties. Finally, the Article examines the modern-day takeaway from Warren's evolving concept of the law and the law's legitimacy, possible parallels to the role of the law as perceived by the Bush administration in its “War on Terror,” and the Obama administration's likely attitude towards the protection of civil liberties.