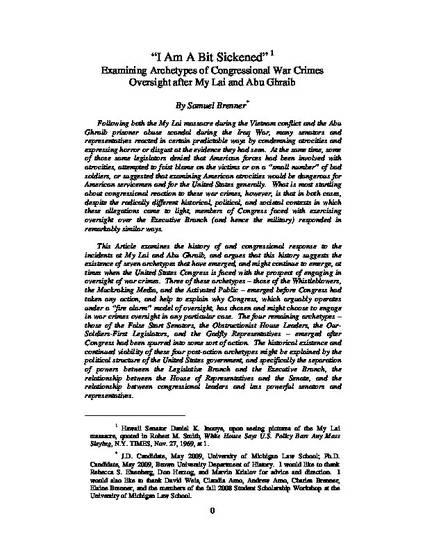 Unpublished Paper
“I Am A Bit Sickened”: Examining Archetypes of Congressional War Crimes Oversight after My Lai and Abu Ghraib
ExpressO (2009)
Download
Abstract

Following both the My Lai massacre during the Vietnam conflict and the Abu Ghraib prisoner abuse scandal during the Iraq War, many senators and representatives reacted in certain predictable ways by condemning atrocities and expressing horror or disgust at the evidence they had seen. At the same time, some of those same legislators denied that American forces had been involved with atrocities, attempted to foist blame on the victims or on a “small number” of bad soldiers, or suggested that examining American atrocities would be dangerous for American servicemen and for the United States generally. What is most startling about congressional reaction to these war crimes, however, is that in both cases, despite the radically different historical, political, and societal contexts in which these allegations came to light, members of Congress faced with exercising oversight over the Executive Branch (and hence the military) responded in remarkably similar ways.

This Article examines the history of and congressional response to the incidents at My Lai and Abu Ghraib, and argues that this history suggests the existence of seven archetypes that have emerged, and might continue to emerge, at times when the United States Congress is faced with the prospect of engaging in oversight of war crimes. Three of these archetypes – those of the Whistleblowers, the Muckraking Media, and the Activated Public – emerged before Congress had taken any action, and help to explain why Congress, which arguably operates under a “fire alarm” model of oversight, has chosen and might choose to engage in war crimes oversight in any particular case. The four remaining archetypes – those of the False Start Senators, the Obstructionist House Leaders, the Our-Soldiers-First Legislators, and the Gadfly Representatives – emerged after Congress had been spurred into some sort of action. The historical existence and continued viability of these four post-action archetypes might be explained by the political structure of the United States government, and specifically the separation of powers between the Legislative Branch and the Executive Branch, the relationship between the House of Representatives and the Senate, and the relationship between congressional leaders and less powerful senators and representatives.