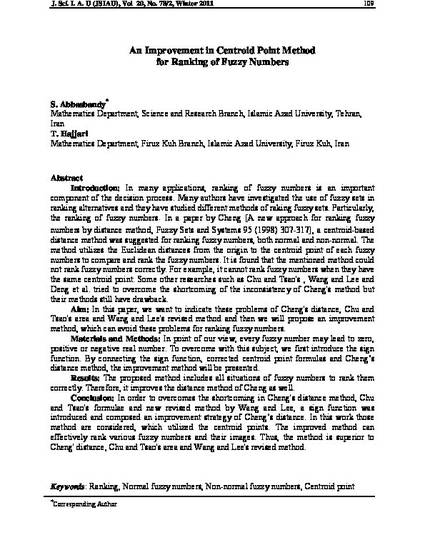 In many applications, ranking of fuzzy numbers is an important component of the decision process. Many authors have investigated the use of fuzzy sets in ranking alternatives and they have studied different methods of raking fuzzy sets. Particularly, the ranking of fuzzy numbers. In a paper by Cheng [A new approach for ranking fuzzy numbers by distance method, Fuzzy Sets and Systems 95 (1998) 307-317], a centroid-based distance method was suggested for ranking fuzzy numbers, both normal and non-normal. The method utilizes the Euclidean distances from the origin to the centroid point of each fuzzy numbers to compare and rank the fuzzy numbers. It is found that the mentioned method could not rank fuzzy numbers correctly. For example, it cannot rank fuzzy numbers when they have the same centroid point. Some other researches such as Chu and Tsao's , Wang and Lee and Deng et al. tried to overcome the shortcoming of the inconsistency of Cheng's method but their methods still have drawback.