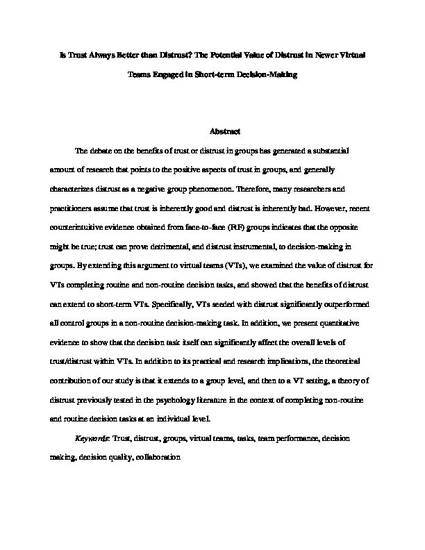 The debate on the benefits of trust or distrust in groups has generated a substantial amount of research that points to the positive aspects of trust in groups, and generally characterizes distrust as a negative group phenomenon. Therefore, many researchers and practitioners assume that trust is inherently good and distrust is inherently bad. However, recent counterintuitive evidence obtained from face-to-face (FtF) groups indicates that the opposite might be true; trust can prove detrimental, and distrust instrumental, to decision-making in groups. By extending this argument to virtual teams (VTs), we examined the value of distrust for VTs completing routine and non-routine decision tasks, and showed that the benefits of distrust can extend to short-term VTs. Specifically, VTs seeded with distrust significantly outperformed all control groups in a non-routine decision-making task. In addition, we present quantitative evidence to show that the decision task itself can significantly affect the overall levels of trust/distrust within VTs. In addition to its practical and research implications, the theoretical contribution of our study is that it extends to a group level, and then to a VT setting, a theory of distrust previously tested in the psychology literature in the context of completing non-routine and routine decision tasks at an individual level.