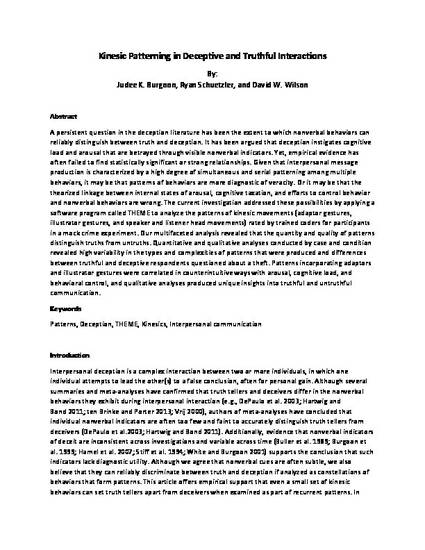 A persistent question in the deception literature has been the extent to which nonverbal behaviors can reliably distinguish between truth and deception. It has been argued that deception instigates cognitive load and arousal that are betrayed through visible nonverbal indicators. Yet, empirical evidence has often failed to find statistically significant or strong relationships. Given that interpersonal message production is characterized by a high degree of simultaneous and serial patterning among multiple behaviors, it may be that patterns of behaviors are more diagnostic of veracity. Or it may be that the theorized linkage between internal states of arousal, cognitive taxation, and efforts to control behavior and nonverbal behaviors are wrong. The current investigation addressed these possibilities by applying a software program called THEME to analyze the patterns of kinesic movements (adaptor gestures, illustrator gestures, and speaker and listener head movements) rated by trained coders for participants in a mock crime experiment. Our multifaceted analysis revealed that the quantity and quality of patterns distinguish truths from untruths. Quantitative and qualitative analyses conducted by case and condition revealed high variability in the types and complexities of patterns that were produced and differences between truthful and deceptive respondents questioned about a theft. Patterns incorporating adaptors and illustrator gestures were correlated in counterintuitive ways with arousal, cognitive load, and behavioral control, and qualitative analyses produced unique insights into truthful and untruthful communication.