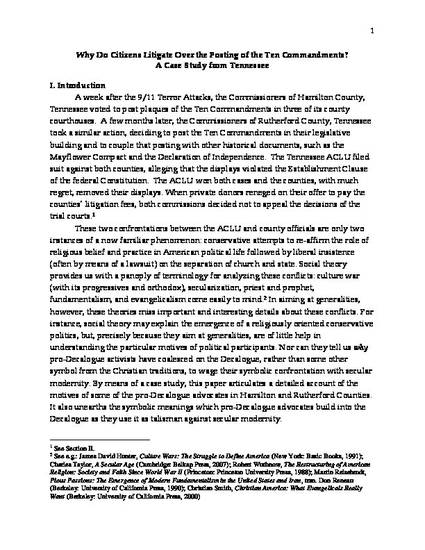 Unpublished Paper
Why Do Citizens Litigate Over the Posting of the Ten Commandments?
ExpressO (2011)
Download
Abstract

In recent years the federal courts have experienced an increase in litigation over a state’s display of the Decalogue. Common explanations for this increase in litigation refer to general political and sociological categories, such as “fundamentalism” and “urbanization,” while abstracting from the actual intentions of individuals attempting to display the Decalogue. To identify these intentions, I provide a detailed case study of three instances of pro-Decalogue advocacy in Tennessee. In this case study, pro-Decalogue advocates situate their political efforts within a narrative of American decline. This narrative is a jeremiad in which the Supreme Court is the origin and agent of America’s decline. Accordingly, efforts to post the Ten Commandments are an attempt to instigate a confrontation with the Court which will result in its reformation. To equip it for this confrontation, the Decalogue absorbs a matrix of symbolic meanings. In particular, it is represented as the simple, universal, and prohibitive “transcendent moral law.” Concurrently, its “spiritual” features are entirely absent and pro-Decalogue advocates display no concern for using the Decalogue for converting the citizenry to Christianity. Other prominent symbols from the Christian tradition lack the characteristics which would enable them to absorb these symbolic meanings and consequently pay no role in the effort of pro-Decalogue advocates to reform the Supreme Court.

Disciplines
Publication Date
Citation Information
Ross Astoria. "Why Do Citizens Litigate Over the Posting of the Ten Commandments?" ExpressO (2011)
Available at: http://works.bepress.com/ross_astoria/1/