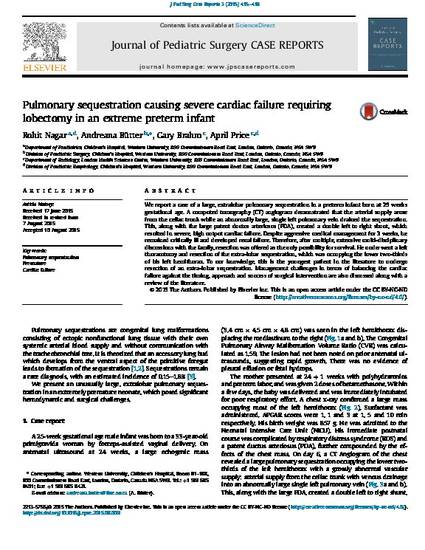 We report a case of a large, extralobar pulmonary sequestration in a preterm infant born at 25 weeks gestational age. A computed tomography (CT) angiogram demonstrated that the arterial supply arose from the celiac trunk while an abnormally large, single left pulmonary vein drained the sequestration. This, along with the large patent ductus arteriosus (PDA), created a double left to right shunt, which resulted in severe, high output cardiac failure. Despite aggressive medical management for 3 weeks, he remained critically ill and developed renal failure. Therefore, after multiple, extensive multi-disciplinary discussions with the family, resection was offered as the only possibility for survival. He underwent a left thoracotomy and resection of the extra-lobar sequestration, which was occupying the lower two-thirds of his left hemithorax. To our knowledge, this is the youngest patient in the literature to undergo resection of an extra-lobar sequestration. Management challenges in terms of balancing the cardiac failure against the timing, approach and success of surgical intervention are also discussed along with a review of the literature.