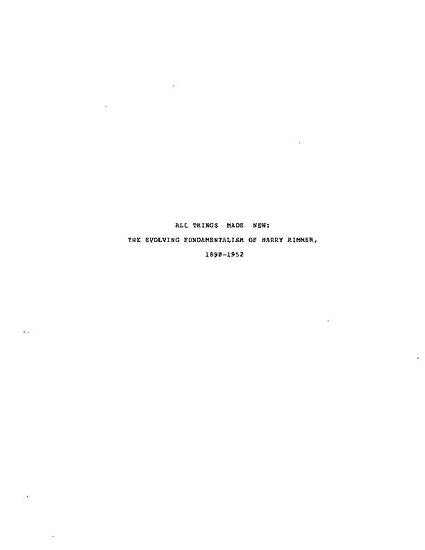 Harry Rimmer (1890-1952) was a national leader of American fundamentalism in the first half of the twentieth century. Associated with fundamentalism from its beginning, Rimmer remained committed to the "fundamentals" throughout his life, but eschewed the separatistic tendencies of some fundamentalists, encouraged conservative ecumenism, and was a harbinger of an emerging evangelicalism. Rimmer began his career has an itinerant evangelist, serving in skid row missions, logging camps, Indian missions, military camps, YMCA youth meetings, and city-wide revival crusades. His message and style were typical of fundamentalist evangelists during the era of Billy Sunday; Rimmer used colorful and dramatic techniques for the purpose of "soul winning" and promoting civic morality. Rimmer changed the focus of his ministry during the twenties by increasingly emphasizing Bible and science themes. He launched a crusade against evolution by creating the Research Science Bureau, testifying in behalf of state anti-evolution laws, and appearing in conferences and highly publicized debates. Rimmer was a symbolic creationist, a scientific prophet, who paved the way for later creation-scientists, by doing first-hand research on scientific questions and opposing evolution for both religious and scientific reasons. Rimmer participated in the fundamentalist-modernist controversy in the Presbyterian Church in the thirties. Though he continued to contribute to the creationist cause, the new focus of his work was apologetics and the defense of the Bible. His efforts to change the national church were unsuccessful, but he significantly altered the theological complexion of the Duluth Presbytery. In the last years of his life Rimmer became an evangelical statesmen. Returning to an eclectic, itinerant ministry, he continued his popular conference ministry and student evangelism, started servicemen's centers during World War II, and traveled extensively in behalf of world missions. Rimmer's ministry had a prophetic dimension, as he emphasized eschatological themes, current events, and civic righteousness. He also became an advocate of conservative unity, by proclaiming broadly evangelical doctrines, emphasizing cooperative ventures among evangelical Christians, and supporting organizations such as the National Association of Evangelicals.