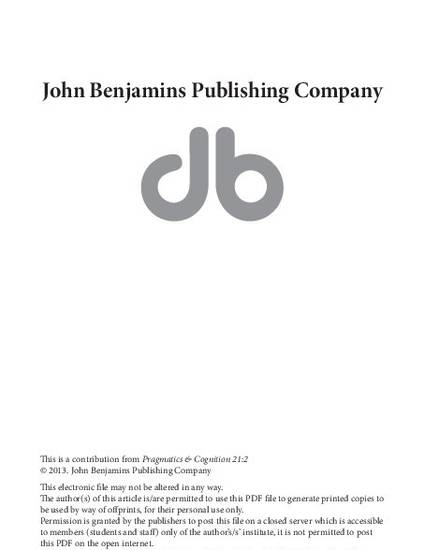 In a 2007 paper, we argued that speakers with Autism Spectrum Disorders (ASDs) exhibit pragmatic abilities which are surprising given the usual understanding of communication in that group. That is, it is commonly reported that people diagnosed with an ASD have trouble with metaphor, irony, conversational implicature and other non-literal language. This is not a matter of trouble with knowledge and application of rules of grammar. The difficulties lie, rather, in successful communicative interaction. Though we did find pragmatic errors within literal talk, the transcribed conversations we studied showed many, many successes. A second paper reinforced our finding of a general level of success (de Villiers, Myers, and Stainton 2012). It considered differences within the class of pragmatically-inflected yet literal speech acts. The present paper carries our project forward. It overcomes some of the methodological limitations of the second paper, by increasing sample size, and looking at frequency of use rather than just seeming errors. It also includes a control sample. The emerging results are two-fold. On the one hand, there was a slight, statistically significant difference in frequency of use between our participants and the controls in four subcategories: indexicals, possessives, polysemy and degree on a scale. In all four, the participants diagnosed with ASDs had fewer occurrences overall, relative to controls. On the other hand, there was no significant difference in error rates between ASDs and controls — not in any of the eight categories of pragmatic determinants of literal content that we coded for. The upshot is that, though there were less-preferred forms for participants with ASDs, they do very well indeed with pragmatic determinants of literal content.