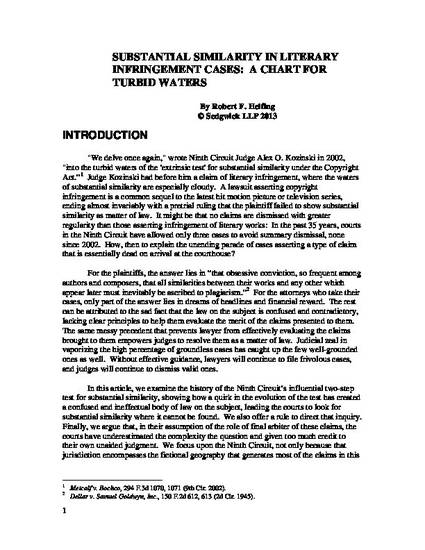 "We delve once again," wrote Ninth Circuit Judge Alex O. Kozinski, "into the turbid waters of the 'extrinsic test' for substantial similarity under the Copyright Act.”[1] The court had before it a claim that a popular television series infringed the copyrights in plaintiffs’ screenplays. Precedent regarding substantial similarity is particularly confused in cases involving literary infringement, resulting in virtually automatic rejection: In the past 35 years, courts in the Ninth Circuit has allowed only three such claims to avoid summary dismissal, none since 2002 when Judge Kozinski made his remark about turbid waters. Yet, in the absence of understandable precedent, lawyers continue to file the cases.

The article examines the history of the Ninth Circuit’s influential two-step test for substantial similarity. It shows how a quirk in the evolution of the test has created a confused and ineffectual body of law on the subject, leading the courts to look for substantial similarity where it cannot be found. The article proposes a rule to direct the inquiry. Finally, it argues that, in their assumption of the role of final arbiter, the courts have underestimated the complexity the question and given too much credit to their own unaided judgment.

Almost from the beginning, however, the courts did not apply the two-step test as envisioned by the Krofft court. Instead of merely evaluating the similarity of ideas at the first step of the test, the courts applied the extrinsic test to determine substantial similarity of protected expression. Because they failed to recognize that they had deviated from the Krofft formulation, however, they continued to apply the procedural rules prescribed by Krofft for its extrinsic test. Following Krofft’s invitation to resolve that simpler, factual test as a matter of law, subsequent courts took unto themselves the role of first and final arbiter of the critical issue reserved by the Krofft court to the jury at the second step of the process: substantial similarity of protected expression. Under the application of the courts, the extrinsic test has become the terminus of almost every literary infringement claim filed in the Ninth Circuit for more than three decades.

The courts deviated from Krofft, not only in assuming responsibility for evaluating the similarity of protected expression, but also in their method for evaluating it. Under Krofft, the issue was to be decided through a subjective response to the entirety of the work. After Krofft, however, the courts undertook an “objective” analysis, dissecting works into their individual elements, then eliminating from consideration each element that did not in itself warrant protection. This method virtually assured dismissal of the claims because, by definition, no element considered by the test is individually entitled to protection.

A seeming breakthrough occurred in Metcalf v. Bochco[5], where a Ninth Circuit panel headed by Judge Kozinski reversed a grant of summary judgment for the defendants. As in almost every case before it, the court in Metcalf found that none of the similarities cited by the plaintiffs were individually protected. The court pursued its analysis beyond that truism, however, and determined that an original “selection and arrangement” of unprotected elements might itself be protectable. As stated by the court, “Each note in a scale, for example, is not protectable, but a pattern of notes in a tune may earn copyright protection.” [6] The court held that the similarities between the works before it formed a combination that raised a triable issue of fact on the question of substantial similarity.

In nearly all of the thirty literary infringement cases in the Ninth Circuit since Metcalf v. Bochco, however, the courts have found that the plaintiff failed to meet the test as a matter of law. In applying the extrinsic test, the courts have reverted to the process of dissecting works only to reach the usual conclusion that substantial similarity is lacking because none of the similarities are individually protected. Metcalf itself has been mischaracterized, distinguished or simply ignored.

The failure of the Metcalf court to provide a clear standard to guide application of its rule has led to the de facto abnegation of its rule. In addition to clarifying the confusion that has characterized precedent in the area, the article proposes an appropriate standard, and encourages the courts to reconsider the unquestioned assumption that they are qualified to resolve questions of artistic similarity.