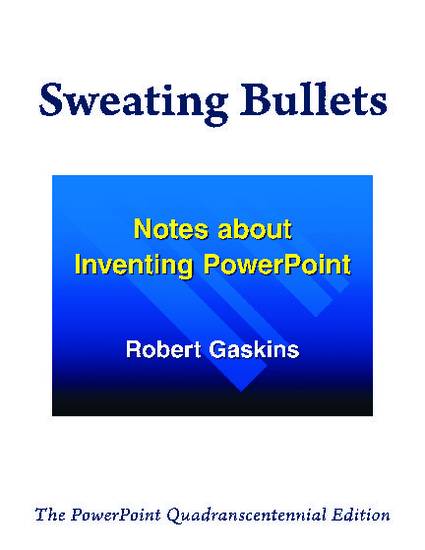 PowerPoint was invented to be the first presentation software specifically for Macintosh and Windows personal computers. During its design and development as a Silicon Valley startup it received the first venture capital investment ever made by Apple. PowerPoint 1.0 was shipped in 1987 as a Mac program to make black-and-white overhead presentations. Soon thereafter it became the first significant acquisition ever made by Microsoft, who set up a new Graphics Business Unit in Silicon Valley to develop it further. A color version, adding features to also make 35mm slide presentations, was shipped for Mac in 1988 and for Windows in 1990. Live video presentations were added in a third version shipped in 1992 for both Mac and Windows. By then PowerPoint sales were over $100 million annually, and it was already becoming the standard for presentations; twenty-five years later it is installed on over one billion computers worldwide.

Robert Gaskins invented PowerPoint and managed its design and development as a startup for three years, and then headed the new Microsoft PowerPoint business unit in Silicon Valley for another five years. He has written this book to commemorate the twenty-fifth anniversary of PowerPoint, recounting stories of the perils narrowly evaded as a startup, dissecting the complexities of being the first distant development group in Microsoft, and explaining decisions and insights that enabled PowerPoint to become a lasting success well beyond its original business uses.