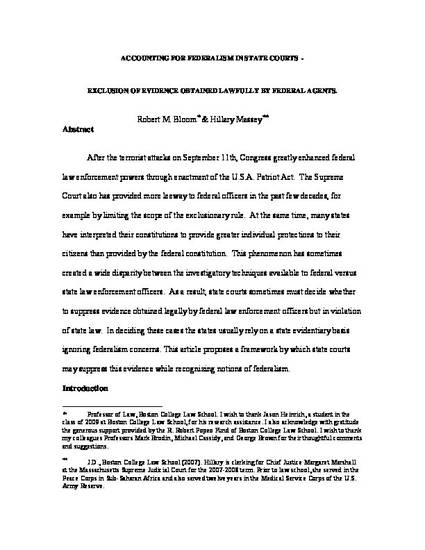 After the terrorist attacks on September 11th, Congress greatly enhanced federal law enforcement powers through enactment of the U.S.A. Patriot Act. The Supreme Court also has provided more leeway to federal officers in the past few decades, for example by limiting the scope of the exclusionary rule. At the same time, many states have interpreted their constitutions to provide greater individual protections to their citizens than provided by the federal constitution. This phenomenon has sometimes created a wide disparity between the investigatory techniques available to federal versus state law enforcement officers. As a result, state courts sometimes must decide whether to suppress evidence obtained legally by federal law enforcement officers but in violation of state law. In deciding these cases the states usually rely on a state evidentiary basis ignoring federalism concerns. This article proposes a framework by which state courts may suppress this evidence while recognizing notions of federalism.