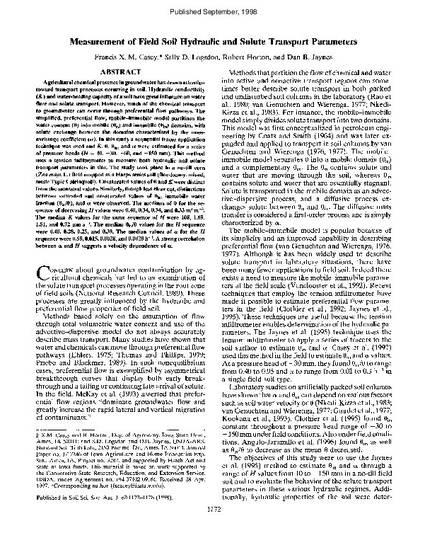 Agricultural chemical presence in groundwater has drawn attention toward transport processes occurring in soil. Hydraulic conductivity (K) and water-holding capacity of a soil have great influence on water flow and solute transport. However, much of the chemical transport to groundwater can occur through preferential flow pathways. The simplified, preferential flow, mobile-immobile model partitions the water content (θ) into mobile (θm) and immobile (θim) domains, with solute exchange between the domains characterized by the mass-exchange coefficient (α). In this study a sequential tracer application technique was used and K, θ, θim, and α were estimated for a series of pressure heads (H = 10, −30, −60, and −150 mm). This method uses a tension infiltrometer to measure both hydraulic and solute transport parameters in situ. The study took place in a no-till corn (Zea mays L.) field mapped as a Harps series soil (fine-loamy, mixed, mesic Typic Calciaquoll). Unsaturated values of θ and K were distinct from the saturated values. Similarly, though less clear cut, distinctions between saturated and unsaturated values of θim, immobile water fraction (θim/θ), and α were observed. The medians of θ for the sequence of decreasing H values were 0.40, 0.34, 0.34, and 0.33 m3 m-3. The median K values for the same sequence of H were 108, 1.69, 1.51, and 0.72 µm s-1. The median θim/θ values for the H sequence were 0.40, 0.28, 0.25, and 0.39. The median values of α for the H sequence were 0.59, 0.015, 0.0028, and 0.0029 h-1. A strong correlation between α and H suggests a velocity dependence of α.

Rights
Works produced by employees of the U.S. Government as part of their official duties are not copyrighted within the U.S. The content of this document is not copyrighted.
Language
en
File Format
application/pdf
Citation Information
Francis X. M. Casey, Sally D. Logsdon, Robert Horton and Dan B. Jaynes. "Measurement of Field Soil Hydraulic and Solute Transport Parameters" Soil Science Society of America Journal Vol. 62 Iss. 5 (1998) p. 1172 - 1178
Available at: http://works.bepress.com/robert-horton/96/