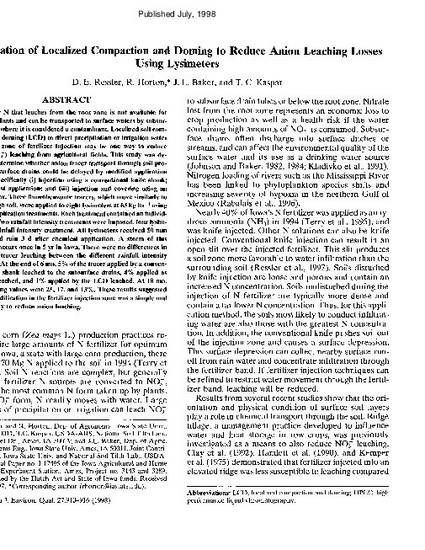 Fertilizer N that leaches from the root zone is not available for uptake by plants and can be transported to surface waters by subsurface drains, where it is considered a contaminant. Localized soil compaction and doming (LCD) to divert precipitation or irrigation water around the zone of fertilizer injection may be one way to reduce nitrate (NO−3) leaching from agricultural fields. This study was designed to determine whether anion tracer transport through soil profiles to subsurface drains could be delayed by modified application methods, specifically (i) injection using a conventional knife shank; (ii) broadcast application; and (iii) injection and covering using an LCD injector. Three fluorobenzoate tracers, which move similarly to NO−3 through soil, were applied to eight lysimeters at 63 kg ha−1 using the three application treatments. Each treatment contained an individual tracer. Two rainfall intensity treatments were imposed, four lysimeters per rainfall intensity treatment. All lysimeters received 50 mm of simulated rain 3 d after chemical application. A storm of this magnitude occurs once in 5 yr in Iowa. There were no differences in cumulative tracer leaching between the different rainfall intensity treatments. At the end of 6 mo, 5% of the tracer applied by a conventional knife shank leached to the subsurface drains, 4% applied as broadcast leached, and 1% applied by the LCD leached. At 18 mo, corresponding values were 25, 17, and 13%. These results suggested that soil modification in the fertilizer injection zone was a simple and effective way to reduce anion leaching.