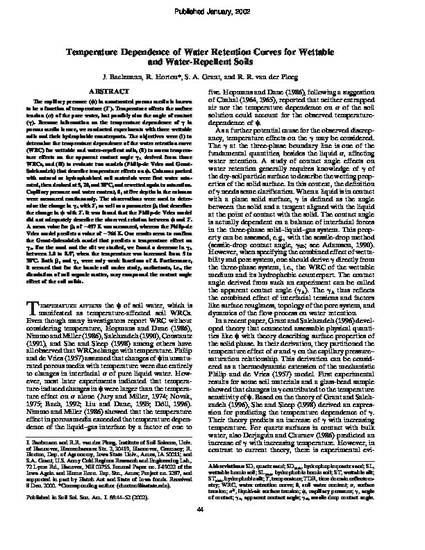 The capillary pressure (ψ) in unsaturated porous media is known to be a function of temperature (T). Temperature affects the surface tension (σ) of the pore water, but possibly also the angle of contact (γ). Because information on the temperature dependence of γ in porous media is rare, we conducted experiments with three wettable soils and their hydrophobic counterparts. The objectives were (i) to determine the temperature dependence of the water retention curve (WRC) for wettable and water-repellent soils, (ii) to assess temperature effects on the apparent contact angle γA derived from those WRCs, and (iii) to evaluate two models (Philip-de Vries and Grant-Salehzadeh) that describe temperature effects on ψ. Columns packed with natural or hydrophobized soil materials were first water saturated, then drained at 5, 20, and 38°C, and rewetted again to saturation. Capillary pressure and water content, θ, at five depths in the columns were measured continuously. The observations were used to determine the change in γA with T, as well as a parameter β0 that describes the change in ψ with T It was found that the Philip-de Vries model did not adequately describe the observed relation between ψ and T A mean value for β0 of −457 K was measured, whereas the Philip-de Vries model predicts a value of −766 K. Our results seem to confirm the Grant-Salezahdeh model that predicts a temperature effect on γA For the sand and the silt we studied, we found a decrease in γA between 1.0 to 8.5°, when the temperature was increased from 5 to 38°C. Both β0 and γA were only weak functions of θ. Furthermore, it seemed that for the humic soil under study, surfactants, i.e., the dissolution of soil organic matter, may compound the contact angle effect of the soil solids.

Rights
Works produced by employees of the U.S. Government as part of their official duties are not copyrighted within the U.S. The content of this document is not copyrighted.
Language
en
File Format
application/pdf
Citation Information
J. Bachmann, R. Horton, S. A. Grant and R. R. van der Ploeg. "Temperature Dependence of Water Retention Curves for Wettable and Water-Repellent Soils" Soil Science Society of America Journal Vol. 66 Iss. 1 (2002) p. 44 - 52
Available at: http://works.bepress.com/robert-horton/91/