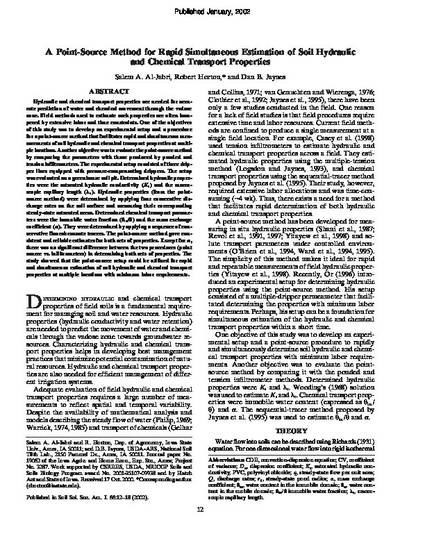 Hydraulic and chemical transport properties are needed for accurate prediction of water and chemical movement through the vadose zone. Field methods used to estimate such properties are often hampered by extensive labor and time constraints. One of the objectives of this study was to develop an experimental setup and a procedure for a point-source method that facilitates rapid and simultaneous measurements of soil hydraulic and chemical transport properties at multiple locations. Another objective was to evaluate the point-source method by comparing the parameters with those produced by ponded and tension infiltrometers. The experimental setup consisted of three dripper lines equipped with pressure-compensating drippers. The setup was evaluated on a greenhouse soil pit. Determined hydraulic properties were the saturated hydraulic conductivity (K s) and the macroscopic capillary length (λc). Hydraulic properties (from the point-source method) were determined by applying four consecutive discharge rates on the soil surface and measuring their corresponding steady-state saturated areas. Determined chemical transport parameters were the immobile water fraction (θim/θ) and the mass exchange coefficient (α). They were determined by applying a sequence of conservative fluorobenzoate tracers. The point-source method gave consistent and reliable estimates for both sets of properties. Except for α, there was no significant difference between the two procedures (point source vs. infiltrometers) in determining both sets of properties. The study showed that the point-source setup could be utilized for rapid and simultaneous estimation of soil hydraulic and chemical transport properties at multiple locations with minimum labor requirements.

This article is published as Al-Jabri, Salem A., Robert Horton, and Dan B. Jaynes. "A point-source method for rapid simultaneous estimation of soil hydraulic and chemical transport properties." Soil Science Society of America Journal 66, no. 1 (2002): 12-18. doi; 10.2136/sssaj2002.1200. Posted with permission.

Rights
Works produced by employees of the U.S. government as part of their official duties are not copyrighted within the U.S. The Content of this document is not copyrighted.
Language
en
File Format
application/pdf
Citation Information
Salem A. Al-Jabri, Robert Horton and Dan B. Jaynes. "A Point-Source Method for Rapid Simultaneous Estimation of Soil Hydraulic and Chemical Transport Properties" Soil Science Society of America Journal Vol. 66 Iss. 1 (2002) p. 12 - 18
Available at: http://works.bepress.com/robert-horton/90/