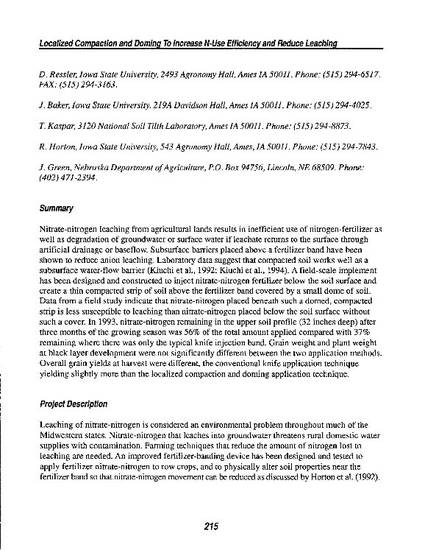 Nitrate-nitrogen leaching from agricultural lands results in inefficient use of nitrogen-fertilizer as well as degradation of groundwater or surface water if leachate returns to the surf ace through artificial drainage or baseflow. Subsurface barriers placed above a fertilizer band have been shown to reduce anion leaching. Laboratory data suggest that compacted soil works well as a subsurface water-flow barrier (Kiuchi et al., 1992; Kiuchi et al., 1994). A field-scale implement has been designed and constructed to inject nitrate-nitrogen fertilizer below the soil surface and create a thin compacted strip of soil above the fertilizer band covered by a small dome of soil. Data from a field study indicate that nitrate-nitrogen placed beneath such a domed, compacted strip is less susceptible to leaching than nitrate-nitrogen placed below the soil surface without such a cover. In 1993, nitrate-nitrogen remaining in the upper soil profile (32 inches deep) after three months of the growing season was 56% of the total amount applied compared with 37% remaining where there was only the typical knife injection band. Grain weight and plant weight at black layer development were not significantly different between the two application methods. Overall grain yields at harvest were different, the conventional knife application technique yielding slightly more than the localized compaction and doming application technique.