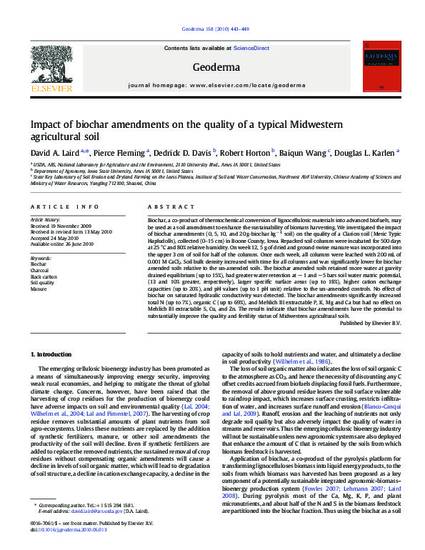 Biochar, a co-product of thermochemical conversion of lignocellulosic materials into advanced biofuels, may be used as a soil amendment to enhance the sustainability of biomass harvesting. We investigated the impact of biochar amendments (0, 5, 10, and 20 g-biochar kg− 1 soil) on the quality of a Clarion soil (Mesic Typic Hapludolls), collected (0–15 cm) in Boone County, Iowa. Repacked soil columns were incubated for 500 days at 25 °C and 80% relative humidity. On week 12, 5 g of dried and ground swine manure was incorporated into the upper 3 cm of soil for half of the columns. Once each week, all columns were leached with 200 mL of 0.001 M CaCl2. Soil bulk density increased with time for all columns and was significantly lower for biochar amended soils relative to the un-amended soils. The biochar amended soils retained more water at gravity drained equilibrium (up to 15%), had greater water retention at − 1 and −5 bars soil water matric potential, (13 and 10% greater, respectively), larger specific surface areas (up to 18%), higher cation exchange capacities (up to 20%), and pH values (up to 1 pH unit) relative to the un-amended controls. No effect of biochar on saturated hydraulic conductivity was detected. The biochar amendments significantly increased total N (up to 7%), organic C (up to 69%), and Mehlich III extractable P, K, Mg and Ca but had no effect on Mehlich III extractable S, Cu, and Zn. The results indicate that biochar amendments have the potential to substantially improve the quality and fertility status of Midwestern agricultural soils.

Rights
Works produced by employees of the U.S. Government as part of their official duties are not copyrighted within the U.S. The content of this document is not copyrighted.
Language
en
File Format
application/pdf
Citation Information
David A. Laird, Pierce Fleming, Dedrick D. Davis, Robert Horton, et al.. "Impact of biochar amendments on the quality of a typical Midwestern agricultural soil" Geoderma Vol. 158 Iss. 3-4 (2010) p. 443 - 449
Available at: http://works.bepress.com/robert-horton/56/