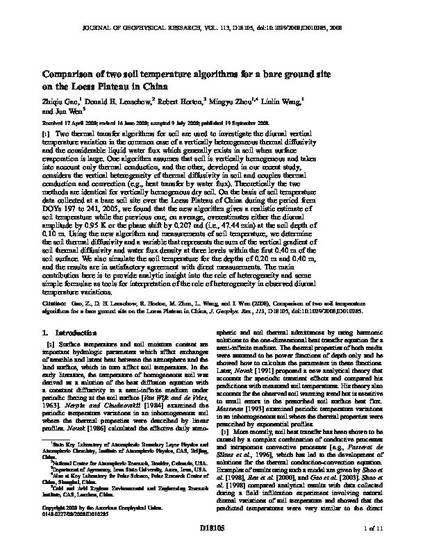 Two thermal transfer algorithms for soil are used to investigate the diurnal vertical temperature variation in the common case of a vertically heterogeneous thermal diffusivity and the considerable liquid water flux which generally exists in soil when surface evaporation is large. One algorithm assumes that soil is vertically homogenous and takes into account only thermal conduction, and the other, developed in our recent study, considers the vertical heterogeneity of thermal diffusivity in soil and couples thermal conduction and convection (e.g., heat transfer by water flux). Theoretically the two methods are identical for vertically homogenous dry soil. On the basis of soil temperature data collected at a bare soil site over the Loess Plateau of China during the period from DOYs 197 to 241, 2005, we found that the new algorithm gives a realistic estimate of soil temperature while the previous one, on average, overestimates either the diurnal amplitude by 0.95 K or the phase shift by 0.207 rad (i.e., 47.44 min) at the soil depth of 0.10 m. Using the new algorithm and measurements of soil temperature, we determine the soil thermal diffusivity and a variable that represents the sum of the vertical gradient of soil thermal diffusivity and water flux density at three levels within the first 0.40 m of the soil surface. We also simulate the soil temperature for the depths of 0.20 m and 0.40 m, and the results are in satisfactory agreement with direct measurements. The main contribution here is to provide analytic insight into the role of heterogeneity and some simple formulae as tools for interpretation of the role of heterogeneity in observed diurnal temperature variations.