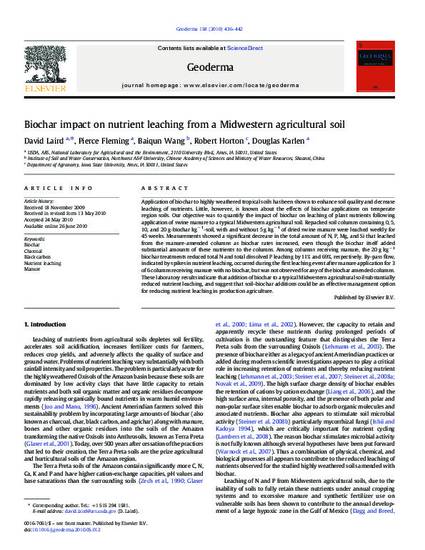 Application of biochar to highly weathered tropical soils has been shown to enhance soil quality and decrease leaching of nutrients. Little, however, is known about the effects of biochar applications on temperate region soils. Our objective was to quantify the impact of biochar on leaching of plant nutrients following application of swine manure to a typical Midwestern agricultural soil. Repacked soil columns containing 0, 5, 10, and 20 g-biochar kg− 1-soil, with and without 5 g kg− 1 of dried swine manure were leached weekly for 45 weeks. Measurements showed a significant decrease in the total amount of N, P, Mg, and Si that leached from the manure-amended columns as biochar rates increased, even though the biochar itself added substantial amounts of these nutrients to the columns. Among columns receiving manure, the 20 g kg− 1 biochar treatments reduced total N and total dissolved P leaching by 11% and 69%, respectively. By-pass flow, indicated by spikes in nutrient leaching, occurred during the first leaching event after manure application for 3 of 6 columns receiving manure with no biochar, but was not observed for any of the biochar amended columns. These laboratory results indicate that addition of biochar to a typical Midwestern agricultural soil substantially reduced nutrient leaching, and suggest that soil–biochar additions could be an effective management option for reducing nutrient leaching in production agriculture.

Rights
Works produced by employees of the U.S. Government as part of their official duties are not copyrighted within the U.S. The content of this document is not copyrighted.
Language
en
File Format
application/pdf
Citation Information
David Laird, Pierce Flemming, Baiqun Wang, Robert Horton, et al.. "Biochar impact on nutrient leaching from a Midwestern agricultural soil" Geoderma Vol. 158 Iss. 3-4 (2010) p. 436 - 442
Available at: http://works.bepress.com/robert-horton/39/