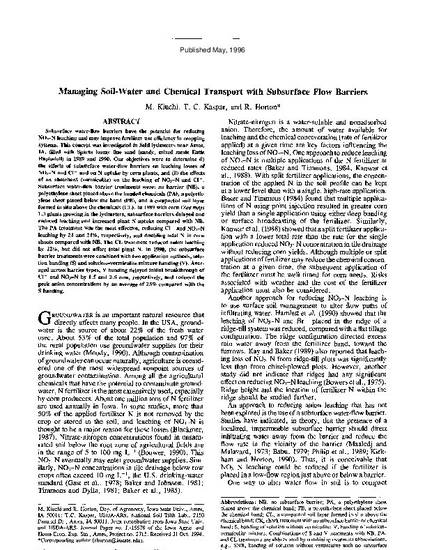 Subsurface water-flow barriers have the potential for reducing NO3-N leaching and may improve fertilizer-use efficiency in cropping systems. This concept was investigated in field lysimeters near Ames, IA, filled with Sparta loamy fine sand (sandy, mixed mesic Entic Hapludoll) in 1989 and 1990. Our objectives were to determine (i) the effects of subsurface water-flow barriers on leaching losses of NO3-N and Cl− and on N uptake by corn plants, and (ii) the effects of an absorbent (vermiculite) on the leaching of NO3-N and Cl−. Subsurface water-flow barrier treatments were: no barrier (NB), a polyethylene sheet placed above the banded chemicals (PA), a polyethylene sheet placed below the band (PB), and a compacted soil layer formed in situ above the chemicals (CL). In 1989 with corn (Zea mays L.) plants growing in the lysimeters, subsurface barriers delayed and reduced leaching and increased plant N uptake compared with NB. The PA treatment was the most effective, reducing Cl− and NO3-N leaching by 24 and 21%, respectively, and doubling total N in corn shoots compared with NB. The CL treatment reduced anion leaching by 12%, but did not affect total plant N. In 1990, the subsurface barrier treatments were combined with two application methods, solution banding (S) and solution-vermiculite mixture banding (V). Averaged across barrier types, V banding delayed initial breakthrough of Cl− and NO3-N by 1.5 and 2.5 mm, respectively, and reduced the peak anion concentrations by an average of 25% compared with the S banding.