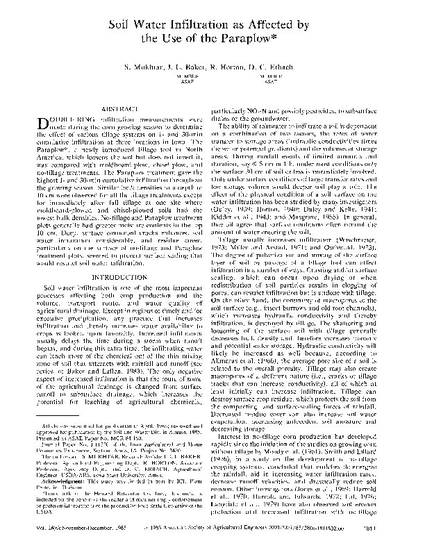 Article
Soil Water Infiltration as Affected by the Use of the Paraplow
Transactions of the ASAE
Download Find in your library
Document Type
Article
Disciplines
Publication Version
Published Version
Publication Date
DOI
10.13031/2013.32524
Abstract

DOUBLE-RING infiltration measurements were made during the corn growing season to determine the effect of various tillage systems on 1- and 30-min cumulative infiltration at three locations in Iowa. The Paraplow*, a newly introduced tillage tool in North America, which loosens the soil but does not invert it, was compared with moldboard-plow, chisel-plow, and no-tillage treatments. The Paraplow treatment gave the highest 1- and 30-min cumulative infiltration throughout the growing season. Similar bulk densities to a depth of 10 cm were observed for all the tillage treatments except for immediately after fall tillage at one site where moldboard-plowed and chisel-plowed soils had the lowest bulk densities. No-tillage and Paraplow treatment plots generally had greater moisture contents in the top 10 cm. Deep, surface connected cracks enhanced soil water infiltration considerably, and residue cover, particularly on the surface of no-tillage and Paraplow treatment plots, seemed to prevent surface sealing that would restrict soil water infiltration.

Rights
Works produced by employees of the U.S. Government as part of their official duties are not copyrighted within the U.S. The content of this document is not copyrighted.
Language
en
File Format
application/pdf
Citation Information
S. Mukhtar, J. L. Baker, R. Horton and D. C. Erbach. "Soil Water Infiltration as Affected by the Use of the Paraplow" Transactions of the ASAE Vol. 28 Iss. 6 (1985) p. 1811 - 1816
Available at: http://works.bepress.com/robert-horton/18/