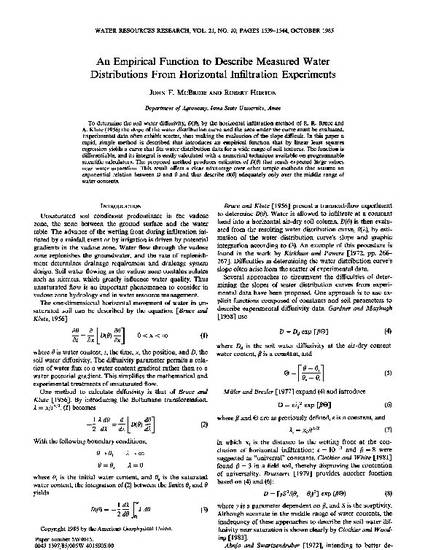 To determine the soil water diffusivity, D(θ), by the horizontal infiltration method of R. R. Bruce and A. Klute (1956) the slope of the water distribution curve and the area under the curve must be evaluated. Experimental data often exhibit scatter, thus making the evaluation of the slope difficult. In this paper a rapid, simple method is described that introduces an empirical function that by linear least squares regression yields a curve that fits water distribution data for a wide range of soil textures. The function is differentiable, and its integral is easily calculated with a numerical technique available on programmable scientific calculators. The proposed method produces estimates of D(θ) that reach expected large values near water saturation. This result offers a clear advantage over other simple methods that assume an exponential relation between D and θ and thus describe D(θ) adequately only over the middle range of water contents.