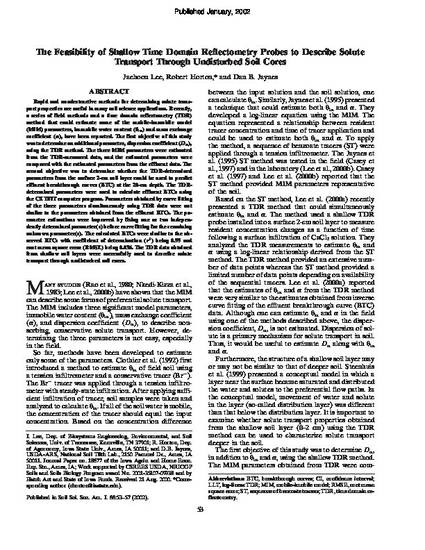 Rapid and nondestructive methods for determining solute transport properties are useful in many soil science applications. Recently, a series of field methods and a time domain reflectometry (TDR) method that could estimate some of the mobile-immobile model (MIM) parameters, immobile water content (θim) and mass exchange coefficient (α), have been reported. The first objective of this study was to determine an additional parameter, dispersion coefficient (D m), using the TDR method. The three MIM parameters were estimated from the TDR-measured data, and the estimated parameters were compared with the estimated parameters from the effluent data. The second objective was to determine whether the TDR-determined parameters from the surface 2-cm soil layer could be used to predict effluent breakthrough curves (BTC) at the 20-cm depth. The TDR-determined parameters were used to calculate effluent BTCs using the CXTFIT computer program. Parameters obtained by curve fitting of the three parameters simultaneously using TDR data were not similar to the parameters obtained from the effluent BTCs. The parameter estimations were improved by fixing one or two independently determined parameter(s) before curve fitting for the remaining unknown parameter(s). The calculated BTCs were similar to the observed BTCs with coefficient of determination (r 2) being 0.99 and root mean square error (RMSE) being 0.036. The TDR data obtained from shallow soil layers were successfully used to describe solute transport through undisturbed soil cores.

Rights
Works produced by employees of the U.S. Government as part of their official duties are not copyrighted within the U.S. The content of this document is not copyrighted.
Language
en
File Format
application/pdf
Citation Information
Jaehoon Lee, Robert Horton and Dan B. Jaynes. "The Feasibility of Shallow Time Domain Reflectometry Probes to Describe Solute Transport Through Undisturbed Soil Cores" Soil Science Society of America Journal Vol. 66 Iss. 1 (2002) p. 53 - 57
Available at: http://works.bepress.com/robert-horton/104/