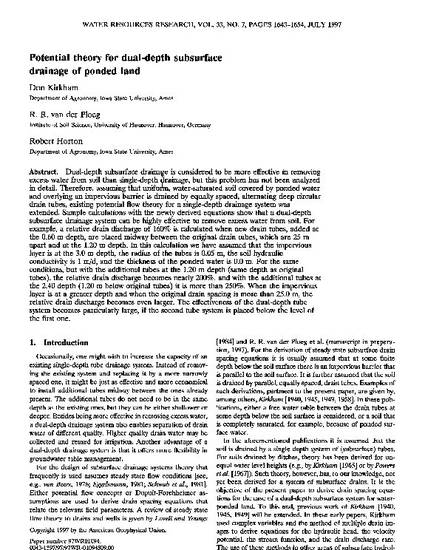 Dual-depth subsurface drainage is considered to be more effective in removing excess water from soil than single-depth drainage, but this problem has not been analyzed in detail. Therefore, assuming that uniform, water-saturated soil covered by ponded water and overlying an impervious barrier is drained by equally spaced, alternating deep circular drain tubes, existing potential flow theory for a single-depth drainage system was extended. Sample calculations with the newly derived equations show that a dual-depth subsurface drainage system can be highly effective to remove excess water from soil. For example, a relative drain discharge of 160% is calculated when new drain tubes, added at the 0.60 m depth, are placed midway between the original drain tubes, which are 25 m apart and at the 1.20 m depth. In this calculation we have assumed that the impervious layer is at the 3.0 m depth, the radius of the tubes is 0.05 m, the soil hydraulic conductivity is 1 m/d, and the thickness of the ponded water is 0.0 m. For the same conditions, but with the additional tubes at the 1.20 m depth (same depth as original tubes), the relative drain discharge becomes nearly 200%, and with the additional tubes at the 2.40 depth (1.20 m below original tubes) it is more than 250%. When the impervious layer is at a greater depth and when the original drain spacing is more than 25.0 m, the relative drain discharge becomes even larger. The effectiveness of the dual-depth tube system becomes particularly large, if the second tube system is placed below the level of the first one.