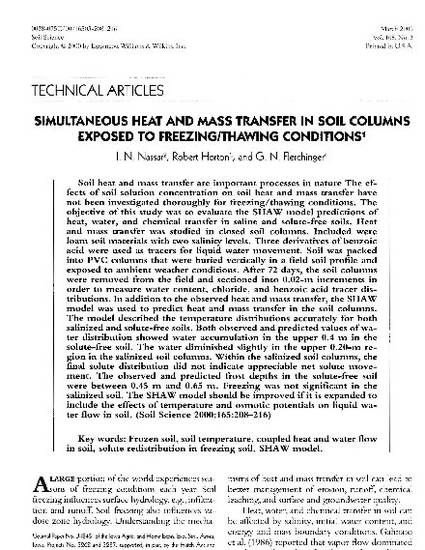 Soil heat and mass transfer are important processes in nature The effects of soil solution concentration on soil heat and mass transfer have not been investigated thoroughly for freezing/thawing conditions. The objective of this study was to evaluate the SHAW model predictions of heat, water, and chemical transfer in saline and solute-free soils. Heat and mass transfer was studied in closed soil columns. Included were loam soil materials with two salinity levels. Three derivatives of benzoic acid were used as tracers for liquid water movement. Soil was packed into PVC columns that were buried vertically in a field soil profile and exposed to ambient weather conditions. After 72 days, the soil columns were removed from the field and sectioned into 0.02-m increments in order to measure water content, chloride, and benzoic acid tracer distributions. In addition to the observed heat and mass transfer, the SHAW model was used to predict heat and mass transfer in the soil columns. The model described the temperature distributions accurately for both salinized and solute-free soils. Both observed and predicted values of water distribution showed water accumulation in the upper 0.4 m in the solute-free soil. The water diminished slightly in the upper 0.20-m region in the salinized soil columns. Within the salinized soil columns, the final solute distribution did not indicate appreciable net solute movement. The observed and predicted frost depths in the solute-free soil were between 0.45 m and 0.65 m. Freezing was not significant in the salinized soil. The SHAW model should be improved if it is expanded to include the effects of temperature and osmotic potentials on liquid water flow in soil.

This article is published as Nassar, I. N., Robert Horton, and G. N. Flerchinger. "Simultaneous heat and mass transfer in soil columns exposed to freezing/thawing conditions." Soil science 165, no. 3 (2000): 208-216. Posted with permission.

Rights
Works produced by employees of the U.S. Government as part of their official duties are not copyrighted within the U.S. The content of this document is not copyrighted.
Language
en
File Format
application/pdf
Citation Information
I. N. Nassar, Robert Horton and G. N. Flerchinger. "Simultaneous heat and mass transfer in soil columns exposed to freezing/thawing conditions" Soil Science Vol. 165 Iss. 3 (2000) p. 208 - 216
Available at: http://works.bepress.com/robert-horton/101/