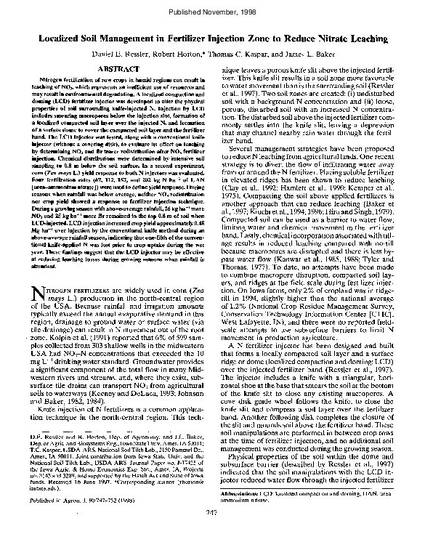 Nitrogen fertilization of row crops in humid regions can result in leaching of NO3, which represents an inefficient use of resources and may result in environmental degradation. A localized compaction and doming (LCD) fertilizer injector was developed to alter the physical properties of soil surrounding knife-injected N. Injection by LCD includes smearing macropores below the injection slot, formation of a localized compacted soil layer over the injected N, and formation of a surface dome to cover the compacted soil layer and the fertilizer band. The LCD injector was tested, along with a conventional knife injector (without a covering disk), to evaluate its effect on leaching by determining NO3 and Br tracer redistribution after NO3 fertilizer injection. Chemical distributions were determined by intensive soil sampling to 0.8 m below the soil surface. In a second experiment, corn (Zea mays L.) yield response to both N injectors was evaluated. Four fertilization rates (67, 112, 157, and 202 kg N ha−1 of UAN [urea-ammonium nitrate]) were used to define yield response. During seasons when rainfall was below average, neither NO3 redistribution nor crop yield showed a response to fertilizer injection technique. During a growing season with above-average rainfall, 26 kg ha−1 more NO3 and 25 kg ha−1 more Br remained in the top 0.8 m of soil when LCD.injected. LCD injection increased crop yield approximately 0.48 Mg ha−1 over injection by the conventional knife method during an above-average rainfall season, indicating that one-fifth of the conventional knife-applied N was lost prior to crop uptake during the wet year. These findings suggest that the LCD injector may be effective at reducing leaching losses during growing seasons when rainfall is abundant.