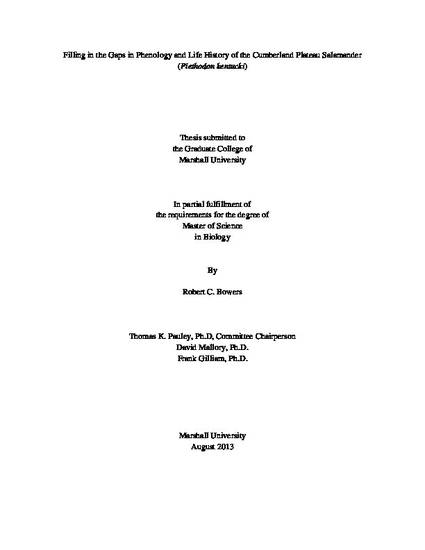 The Cumberland Plateau Salamander, Plethodon kentucki, is a member of the Plethodon glutinosus complex comprising 16 sibling species, which are best differentiated by range. Few studies have been conducted to gain information on the natural history of P. kentucki. To alleviate this, two sites at Beech Fork State Park in Wayne County, West Virginia were used to study the salamander’s general life history with emphasis on reproduction, phenology, and population size. At each site, three 20m x 20m sample plots were arranged based on viability of the habitat for P. kentucki. Ground searches of all cover objects within the plots were conducted once every two to three weeks, preferably on or within 24 hours of rainy nights, between 7:00 and 23:00. Searching under cover objects, which included rocks, logs, and heavy leaf litter, was the best method for finding individuals. Upon capture, salamander sex, age class, and reproductive status were determined. Before releasing specimens, photographs were taken of the lateral surfaces of the animal to be used as a marking technique for recaptures. Environmental variables collected included soil moisture, soil pH, soil temperature, air moisture, air temperature, and precipitation. Environmental data were compared to total captures of P. kentucki to determine correlation between phenology and environmental conditions.