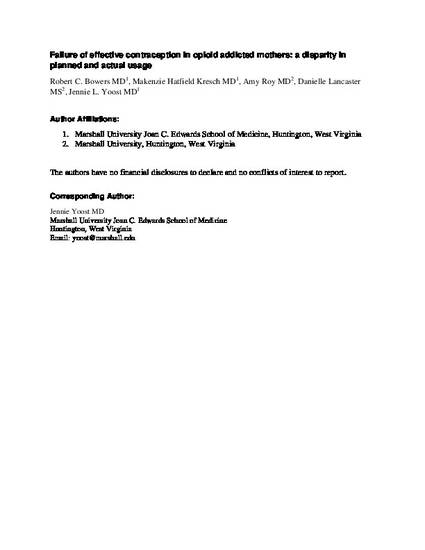 The ongoing opioid epidemic in West Virginia has given rise to a unique population of opioid-addicted obstetric patients. Appropriate education, counseling, and implementation of contraception is of extreme importance among this high risk patient population. This study was a retrospective chart review aimed at evaluating contraception choice and initiation rates among patients enrolled in a maternal buprenorphine maintenance program compared to non-opioid addicted patients. Rates of planned contraception initiation were compared between the two groups. Rates of actual contraception initiation were also compared. Contraceptive choices were then placed into one of three tiers based on efficacy, and rates of initiation of equivalent, less effective, or more effective methods of contraception were compared between the groups. Rates of compliance to planned contraceptive method were low for both groups and not statistically different between the two. Use of long acting reversible contraceptives was statistically higher among the control population. Compared to the control group, a significant number of women in the opioid group received less effective contraception than planned. This study shows that the high-risk population of opioid addicted patients did not receive high efficacy, long lasting contraception at the same rate as their non-opioid addicted peers.