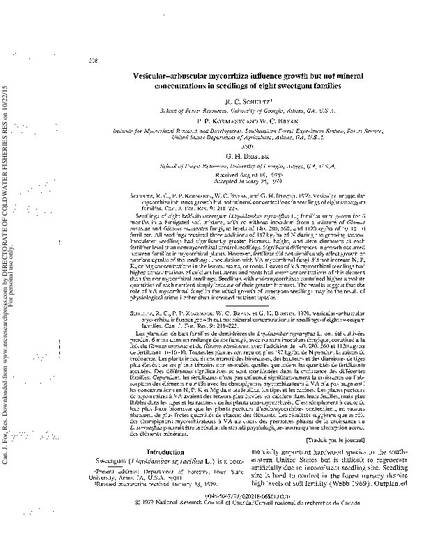 Seedlings of eight half-sib sweetgum (Liquidambar styraciflua L.) families were grown for 6 months in a fumigated soil mixture, with or without inoculum from a mixture of Glomus mosseae and Glomus etunicatus fungi, at levels of 140, 280, 560, and 1120 kg/ha of 10-10-10 fertilizer. All seedlings received three additions of 187 kg/ha of N during the growing season. Inoculated seedlings had significantly greater biomass, height, and stem diameters at each fertilizer level than nonmycorrhizal control seedlings. Significant differences in growth occurred between families in mycorrhizal plants. However, fertilizer did not significantly affect growth or nutrient uptake of the seedlings. Inoculation with VA mycorrhizal fungi did not increase N, P, K, or Mg concentrations in the leaves, stems, or roots. Leaves of VA mycorrhizal seedlings had higher concentrations of calcium but stems and roots had lower concentrations of this element than the nonmycorrhizal seedlings. Seedlings with endomycorrhizae contained higher absolute quantities of each nutrient simply because of their greater biomass. The results suggest that the role of VA mycorrhizal fungi in the initial growth of sweetgum seedlings may be the result of physiological stimuli other than increased nutrient uptake.

Disciplines
Publication Date
Publisher Statement
Works produced by employees of the U.S. Government as part of their official duties are not copyrighted within the U.S. The content of this document is not copyrighted.
Citation Information
Richard C. Schultz, Paul P. Kormanik, W. Craig Bryan and G. H. Brister. "Vesicular-Arbuscular Mycorrhiza Influence Growth but Not Mineral Concentrations in Seedlings of Eight Sweetgum Families" Canadian Journal of Forest Research Vol. 9 Iss. 2 (1979)
Available at: http://works.bepress.com/richard_schultz/33/