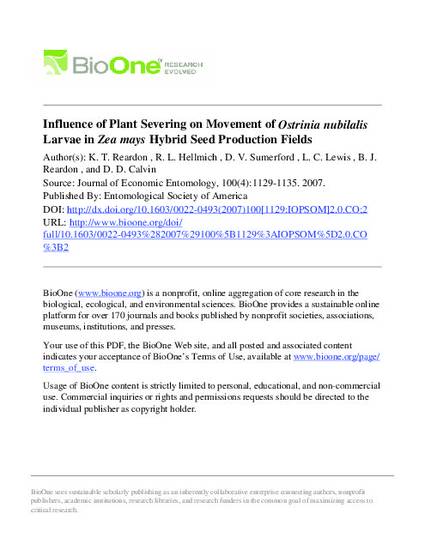 Article
Influence of Plant Severing on Movement of Ostrinia nubilalis Larvae in Zea mays Hybrid Seed Production Fields
Journal of Economic Entomology
Download Find in your library
Document Type
Article
Disciplines
Publication Date
DOI
10.1603/0022-0493(2007)100[1129:IOPSOM]2.0.CO;2
Abstract
Genetically engineered corn hybrids that contain a cry gene from the bacterium Bacillus thuringiensis Berliner (Bt) are gaining popularity for controlling the corn pest Ostrinia nubilalis (Hübner). Continuous use of Bt corn, however, could select for O. nubilalis that are resistant to this corn. Monitoring for insect resistance is important, because it could help maintain the Bt technology. A possible monitoring method is to collect larval insects in commercial drying bins after harvest from Bt seed production fields. A drawback to this method is that these collections may be contaminated by insects that moved as later instars from severed non-Bt male rows into the adjacent Bt female rows. These larvae have little to no exposure to Bt toxin, resulting in possible “false positives.” The objectives of this study were to first find which combination of planting and severing dates produces the least number of larvae that move from non-Bt male plants to Bt female plants and to assess O. nubilalislarval movement from severed non-Bt male rows to Bt female rows. Field studies in 2002 and 2003 were designed to simulate a hybrid seed production field. Results suggest that movement of O. nubilalis larvae from male corn is minimized when corn is planted early and male plants are severed by 2 wk post-anthesis. This reduces the likelihood of false positives by reducing the number of susceptible larvae moving between Bt and non-Bt plants. Also, larvae moved to all four female rows that were adjacent to the severed rows, but there were significantly more larvae found in the closest row compared with the other three. These results could be used to develop a monitoring program to find O. nubilalis larvae with resistance to Bt corn in field populations of O. nubilalis.
Comments