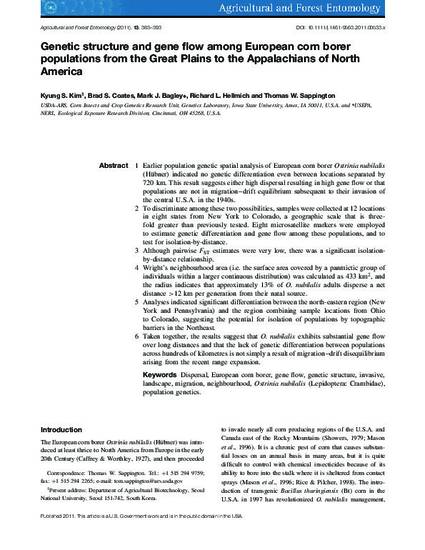 Article
Genetic structure and gene flow among European corn borer populations from the Great Plains to the Appalachians of North America
Agricultural and Forest Entomology
Download Find in your library
Document Type
Article
Disciplines
Publication Date
DOI
10.1111/j.1461-9563.2011.00533.x
Abstract
1 Earlier population genetic spatial analysis of European corn borer Ostrinia nubilalis (Hubner) indicated no genetic differentiation even between locations separated by 720 km. This result suggests either high dispersal resulting in high gene flow or that populations are not in migration–drift equilibrium subsequent to their invasion of the central U.S.A. in the 1940s. 2 To discriminate among these two possibilities, samples were collected at 12 locations in eight states from New York to Colorado, a geographic scale that is three-fold greater than previously tested. Eight microsatellite markers were employed to estimate genetic differentiation and gene flow among these populations, and to test for isolation-by-distance. 3 Although pairwise FST estimates were very low, there was a significant isolation-by-distance relationship. 4 Wright’s neighbourhood area (i.e. the surface area covered by a panmictic group of individuals within a larger continuous distribution) was calculated as 433 km 2,and the radius indicates that approximately 13% of O. nubilalis adults disperse a net distance >12 km per generation from their natal source. 5 Analyses indicated significant differentiation between the north-eastern region (New York and Pennsylvania) and the region combining sample locations from Ohio to Colorado, suggesting the potential for isolation of populations by topographic barriers in the Northeast. 6 Taken together, the results suggest that O. nubilalis exhibits substantial gene flow over long distances and that the lack of genetic differentiation between populations across hundreds of kilometres is not simply a result of migration–drift disequilibrium arising from the recent range expansion.
Comments

Rights
Works produced by employees of the U.S. Government as part of their official duties are not copyrighted within the U.S. The content of this document is not copyrighted.
Language
en
File Format
application/pdf
Citation Information
Kyung Seok Kim, Brad S. Coates, Mark Bagley, Richard L. Hellmich, et al.. "Genetic structure and gene flow among European corn borer populations from the Great Plains to the Appalachians of North America" Agricultural and Forest Entomology Vol. 13 (2011) p. 383 - 393
Available at: http://works.bepress.com/richard_hellmich/94/