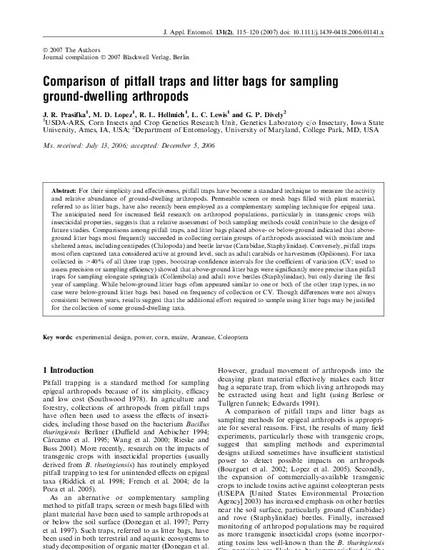 Article
Comparison of pitfall traps and litter bags for sampling ground-dwelling arthropods
Journal of Applied Entomology
Download Find in your library
Document Type
Article
Disciplines
Publication Date
DOI
10.1111/j.1439-0418.2006.01141.x
Abstract
For their simplicity and effectiveness, pitfall traps have become a standard technique to measure the activity and relative abundance of ground-dwelling arthropods. Permeable screen or mesh bags filled with plant material, referred to as litter bags, have also recently been employed as a complementary sampling technique for epigeal taxa. The anticipated need for increased field research on arthropod populations, particularly in transgenic crops with insecticidal properties, suggests that a relative assessment of both sampling methods could contribute to the design of future studies. Comparisons among pitfall traps, and litter bags placed above- or below-ground indicated that aboveground litter bags most frequently succeeded in collecting certain groups of arthropods associated with moisture and sheltered areas, including centipedes (Chilopoda) and beetle larvae (Carabidae, Staphylinidae). Conversely, pitfall traps most often captured taxa considered active at ground level, such as adult carabids or harvestmen (Opiliones). For taxa collected in >40% of all three trap types, bootstrap confidence intervals for the coefficient of variation (CV; used to assess precision or sampling efficiency) showed that above-ground litter bags were significantly more precise than pitfall traps for sampling elongate springtails (Collembola) and adult rove beetles (Staphylinidae), but only during the first year of sampling. While below-ground litter bags often appeared similar to one or both of the other trap types, in no case were below-ground litter bags best based on frequency of collection or CV. Though differences were not always consistent between years, results suggest that the additional effort required to sample using litter bags may be justified for the collection of some ground-dwelling taxa.
Comments