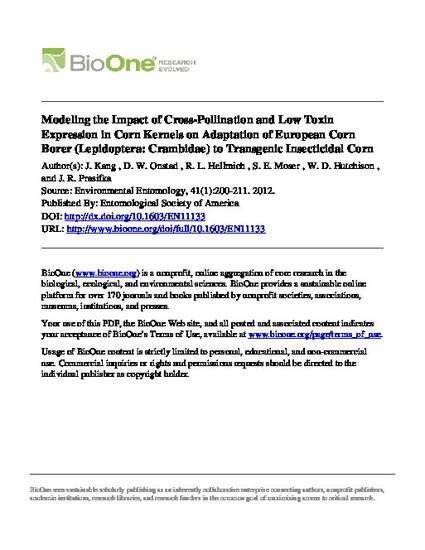 Article
Modeling the Impact of Cross-Pollination and Low Toxin Expression in Corn Kernels on Adaptation of European Corn Borer (Lepidoptera: Crambidae) to Transgenic Insecticidal Corn
Environmental Entomology
Download Find in your library
Document Type
Article
Disciplines
Publication Date
DOI
10.1603/EN11133
Abstract
We used a mathematical model with processes reflecting larval mortality resulting from feeding on cross-pollinated ears or Bt ears of corn to analyze the risk of evolution of Cry-toxin resistance in Ostrinia nubilalis (Hübner). In the simulations, evolution of resistance was delayed equally well by both seed mixtures and blocks with the same proportion of refuge. Our results showed that Bt-pollen drift has little impact on the evolution of Bt resistance in O. nubilalis. However, low-toxin expression in ears of transgenic corn can reduce the durability of transgenic corn expressing single toxin, whereas durability of pyramided corn hybrids is not significantly reduced. The toxinsurvival rate of heterozygous larvae in Bt-corn ears expressing one or two proteins has more impact on evolution of Bt resistance in O. nubilalis than the parameters related to larval movement to Bt ears or the toxin-survival rate of the homozygous susceptible larvae in Bt ears. Bt resistance evolves slower when toxin mortality is distributed across the first two larval stadia than when only the first instars are susceptible to Bt toxins. We suggest that stakeholders examine toxin-survival rates for insect pests and take into account that instars may feed on different parts of Bt corn.
Comments