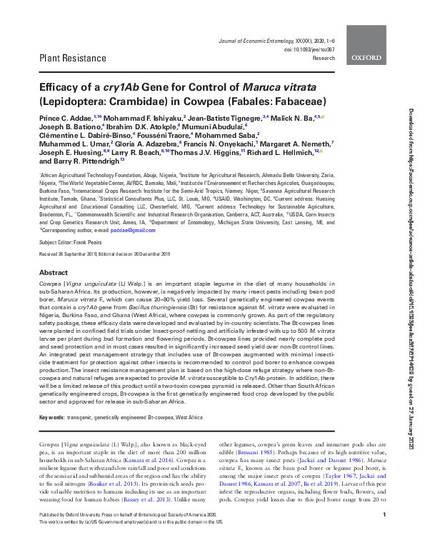 Cowpea [Vigna unguiculata (L) Walp.] is an important staple legume in the diet of many households in sub-Saharan Africa. Its production, however, is negatively impacted by many insect pests including bean pod borer, Maruca vitrata F., which can cause 20–80% yield loss. Several genetically engineered cowpea events that contain a cry1Ab gene from Bacillus thuringiensis (Bt) for resistance against M. vitrata were evaluated in Nigeria, Burkina Faso, and Ghana (West Africa), where cowpea is commonly grown. As part of the regulatory safety package, these efficacy data were developed and evaluated by in-country scientists. The Bt-cowpea lines were planted in confined field trials under Insect-proof netting and artificially infested with up to 500 M. vitrata larvae per plant during bud formation and flowering periods. Bt-cowpea lines provided nearly complete pod and seed protection and in most cases resulted in significantly increased seed yield over non-Bt control lines. An integrated pest management strategy that includes use of Bt-cowpea augmented with minimal insecticide treatment for protection against other insects is recommended to control pod borer to enhance cowpea production. The insect resistance management plan is based on the high-dose refuge strategy where non-Bt-cowpea and natural refuges are expected to provide M. vitrata susceptible to Cry1Ab protein. In addition, there will be a limited release of this product until a two-toxin cowpea pyramid is released. Other than South African genetically engineered crops, Bt-cowpea is the first genetically engineered food crop developed by the public sector and approved for release in sub-Saharan Africa.

Rights
This work is written by (a) US Government employee(s) and is in the public domain in the US.
Language
en
File Format
application/pdf
Citation Information
Prince C. Addae, Mohammad F. Ishiyaku, Jean-Batiste Tignegre, Malick N. Ba, et al.. "Efficacy of a cry1Ab Gene for Control of Maruca vitrata (Lepidoptera: Crambidae) in Cowpea (Fabales: Fabaceae)" Journal of Economic Entomology (2020)
Available at: http://works.bepress.com/richard_hellmich/201/