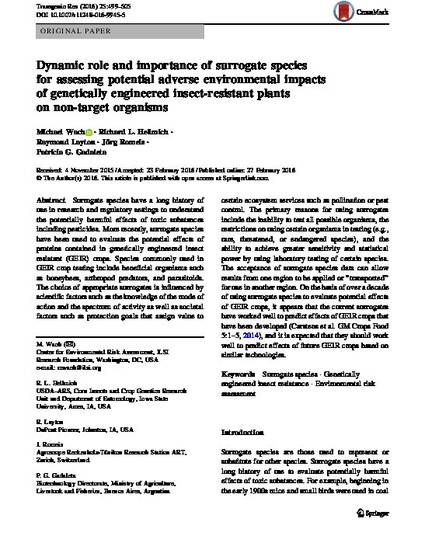 Surrogate species have a long history of use in research and regulatory settings to understand the potentially harmful effects of toxic substances including pesticides. More recently, surrogate species have been used to evaluate the potential effects of proteins contained in genetically engineered insect resistant (GEIR) crops. Species commonly used in GEIR crop testing include beneficial organisms such as honeybees, arthropod predators, and parasitoids. The choice of appropriate surrogates is influenced by scientific factors such as the knowledge of the mode of action and the spectrum of activity as well as societal factors such as protection goals that assign value to certain ecosystem services such as pollination or pest control. The primary reasons for using surrogates include the inability to test all possible organisms, the restrictions on using certain organisms in testing (e.g., rare, threatened, or endangered species), and the ability to achieve greater sensitivity and statistical power by using laboratory testing of certain species. The acceptance of surrogate species data can allow results from one region to be applied or “transported” for use in another region. On the basis of over a decade of using surrogate species to evaluate potential effects of GEIR crops, it appears that the current surrogates have worked well to predict effects of GEIR crops that have been developed (Carstens et al. GM Crops Food 5:1–5, 2014), and it is expected that they should work well to predict effects of future GEIR crops based on similar technologies.