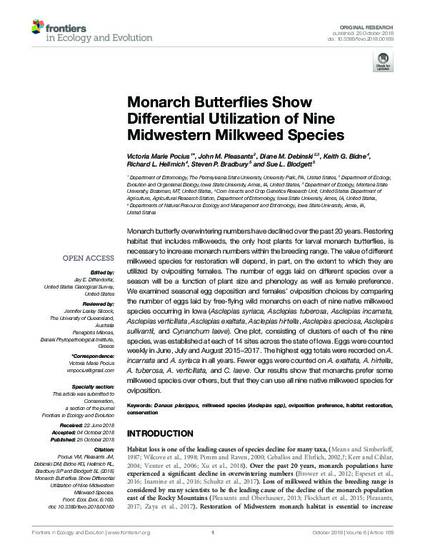 Monarch butterfly overwintering numbers have declined over the past 20 years. Restoring habitat that includes milkweeds, the only host plants for larval monarch butterflies, is necessary to increase monarch numbers within the breeding range. The value of different milkweed species for restoration will depend, in part, on the extent to which they are utilized by ovipositing females. The number of eggs laid on different species over a season will be a function of plant size and phenology as well as female preference. We examined seasonal egg deposition and females' oviposition choices by comparing the number of eggs laid by free-flying wild monarchs on each of nine native milkweed species occurring in Iowa (Asclepias syriaca, Asclepias tuberosa, Asclepias incarnata, Asclepias verticillata, Asclepias exaltata, Asclepias hirtella, Asclepias speciosa, Asclepias sullivantii, and Cynanchum laeve). One plot, consisting of clusters of each of the nine species, was established at each of 14 sites across the state of Iowa. Eggs were counted weekly in June, July and August 2015–2017. The highest egg totals were recorded on A. incarnata and A. syriaca in all years. Fewer eggs were counted on A. exaltata, A. hirtella, A. tuberosa, A. verticillata, and C. laeve. Our results show that monarchs prefer some milkweed species over others, but that they can use all nine native milkweed species for oviposition.