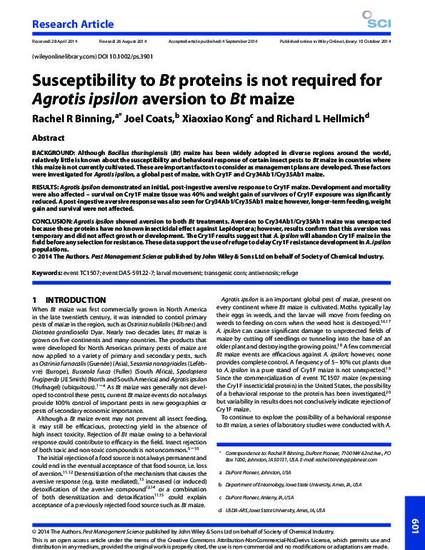 Although Bacillus thuringiensis (Bt) maize has been widely adopted in diverse regions around the world, relatively little is known about the susceptibility and behavioral response of certain insect pests to Bt maize in countries where this maize is not currently cultivated. These are important factors to consider as management plans are developed. These factors were investigated for Agrotis ipsilon, a global pest of maize, with Cry1F and Cry34Ab1/Cry35Ab1 maize. Agrotis ipsilon demonstrated an initial, post-ingestive aversive response to Cry1F maize. Development and mortality were also affected – survival on Cry1F maize tissue was 40% and weight gain of survivors of Cry1F exposure was significantly reduced. A post-ingestive aversive response was also seen for Cry34Ab1/Cry35Ab1 maize; however, longer-term feeding, weight gain and survival were not affected. Agrotis ipsilon showed aversion to both Bt treatments. Aversion to Cry34Ab1/Cry35Ab1 maize was unexpected because these proteins have no known insecticidal effect against Lepidoptera; however, results confirm that this aversion was temporary and did not affect growth or development. The Cry1F results suggest that A. ipsilon will abandon Cry1F maize in the field before any selection for resistance. These data support the use of refuge to delay Cry1F resistance development in A. ipsilon populations.

Rights
Works produced by employees of the U.S. Government as part of their official duties are not copyrighted within the U.S. The content of this document is not copyrighted.
Language
en
File Format
application/pdf
Citation Information
Rachel Renee Binning, Joel R. Coats, Xiaoxiao Kong and Richard L Hellmich. "Susceptibility to Bt Proteins is not Required for Agrotis ipsilon Aversion to Bt Maize" Pest Management Science Vol. 71 Iss. 4 (2015) p. 601 - 606
Available at: http://works.bepress.com/richard_hellmich/145/